Via Francigena: Lucca to Siena

Walk the rolling Tuscan hills in the footsteps of medieval pilgrims

Walking on the Via Francigena from Lucca to Siena

The Via Francigena is an ancient pilgrimage route which led all the way from Canterbury in England to the Eternal City of Rome. Over the centuries, hundreds of thousands of pilgrims travelled this route to visit the tomb of St. Peter, founder of the Christian Church. The route has been recreated in modern times thanks to a document left behind by Archbishop Sigeric of Canterbury, who in the year 994 wrote down the names of the places that had formed the stages of his journey to Rome.

The Northern Tuscany section between Lucca and Siena is regarded as one of the most beautiful stretches of the Via Francigena, leading modern-day pilgrims and pleasure walkers through idyllic Tuscan landscapes of rolling hills, vineyards and charming UNESCO heritage towns.

The trip starts in Lucca, which was an important stop on the Via Francigena, and owed much of its wealth to the trade along the route. The famous wooden crucifix of St. Martin’s Cathedral was the main attraction here for pilgrims. You can spend a day wandering around Lucca’s beautiful gardens and villas or visit some of the nearly one hundred churches that characterise this beautiful town!

To avoid a long section along a busy road, you can take a train to San Miniato-Fucecchio station, where you will be picked up and brought to your accommodation in San Miniato. From there you will initially walk through the open and flat lands of the Val d’Elsa. Later the terrain becomes more hilly and you will have the distinct feeling of travelling back in time as you journey through some of Tuscany’s most important medieval towns and villages. Highlights include the picture-perfect walled village of Monteriggioni and the dramatic skyline of San Gimignano with its thirteen medieval towers. You finally enter the stunning medieval city of Siena via its ancient pilgrim’s entrance of Porta Camollia. You can visit the magnificent 12th Century Cathedral or the Gothic Palazzo Pubblico, or just relax and reward yourself for your efforts with a glass or two of the local Chianti at the Piazza del Campo.

Arrive in the lovely city of Lucca and check-in at the hotel. If you arrive early, you can enjoy a stroll around the town. Highlights include the splendid gardens, majestic bell tower and the impressive Piazza Anfiteatro; the town’s eliptical central square built over the ruins of a 2nd Century Roman amphitheatre. Don’t miss a walk along the tree-lined Renaissance walls to enjoy lovely views of the surrounding countryside.

After breakfast you have a free morning to explore the beautiful town of Lucca. You could visit Cathedral of San Martino to see the wooden crucifix known as the Holy Face (Volto Santo), said to have been carved by Nicodemus.

In the afternoon you will take a public train to San Miniato-Fucecchio (via Pisa or Empoli) where you will be picked up and taken to your accommodation in San Miniato Alto. (The walking route from Lucca to San Minato includes quite a lot of road walking along a busy road, so we feel it is preferable to cover this stretch by train).

The hills around San Miniato are renowned for the production of white truffles, so this would be an ideal place to try a fresh pasta dish with ‘tartufo bianco’.

Your hike along the Via Francigena begins this morning in San Miniato. A paved road takes you into the picturesque Val d’Elsa, with its typical Tuscan landscapes of olive groves, oak woods, vineyards and Cypress trees. Here, you will follow cart tracks and paths along the hilly ridges in the footsteps of Archbishop Sigeric, who walked between Rome and Canterbury in 990. You will pass two “Submansiones” (Sigeric’s “stopping places”); Pieve di Coiano and Pieve a Chianni. Finally you reach the spa town of Gambassi Terme, where you stay overnight.

Today’s stage is shorter, but again offers lots of idyllic Tuscan scenery. You will pass the imposing Sanctuary of Pancole, the tiny village of Collemuccioli and the enchanting Romanesque parish church of Cellole, surrounded by Cypress trees. Finally, the famous medieval towers of San Gimignano come into view. This UNESCO World Heritage town is one of the absolute highlights of the Via Francigena. Reward yourself with an award-winning ice-cream from Gelateria Dondoli as you take a stroll around the cobbled streets and soak up the charming medieval atmosphere. Climb the Torre Grossa for the best panoramic view.

Today the Via Francigena leads you up and down through the Tuscan hills, crossing vineyards, olive groves, fields and woods, until you finally reach your accommodation in Gracciano. Along the way, you can make a detour to discover the fascinating 11th Century Abbey of Santa Maria a Conero.

Day 6: Walk from Gracciano to Monteriggioni

Highlights on today’s hike from Gracciano include the ancient Etruscan Thermae (thermal baths) of Caldane, the beautiful Romanesque church of Strove, and the splendid complex of Abbadia a Isola. The latter is an ancient abbey which was originally surrounded by swamps and offered shelter to pilgrims during medieval times. As you continue from there on an unpaved trail, the remarkable sight of the ancient walled hilltop town of Monteriggioni comes into view. The physical structure of this village has remained virtually untouched since the 13th Century. Within the walls you will discover a beautiful square, a maze of tightly woven cobbled streets and the 13th Century Church of Santa Maria Assunta.

Day 7: Walk from Monteriggioni to Siena

On your final hiking day, you will walk the famous strade bianche (white roads) through the rolling hills of the Sienese countryside. You will pass through the abandoned medieval village of Cerbaia, then through woodland to the Castello della Chiocciola and the hilltop farm of Poggio di Riciano. You then descend into the Renai forest before finally reaching the beautiful city of Siena. You will feel a real sense of achievement as you enter Siena via its ancient pilgrim’s entrance of Porta Camollia.

Enjoy your last evening in one of Italy’s most beautiful medieval cities. Visit the magnificent 12th Century Cathedral or the Gothic Palazzo Pubblico, or just relax with a glass or two of the local Chianti at the Piazza del Campo.

Your Via Francigena walking holiday comes to an end after breakfast this morning, unless you have booked any additional services with us. 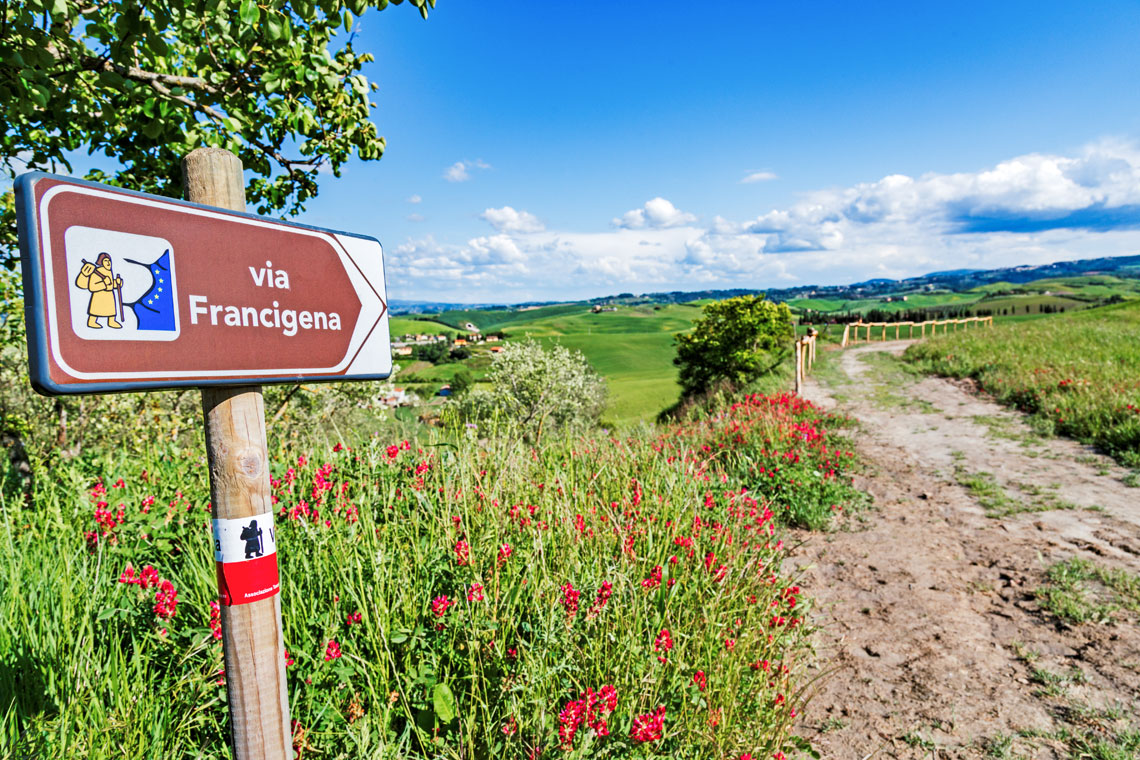 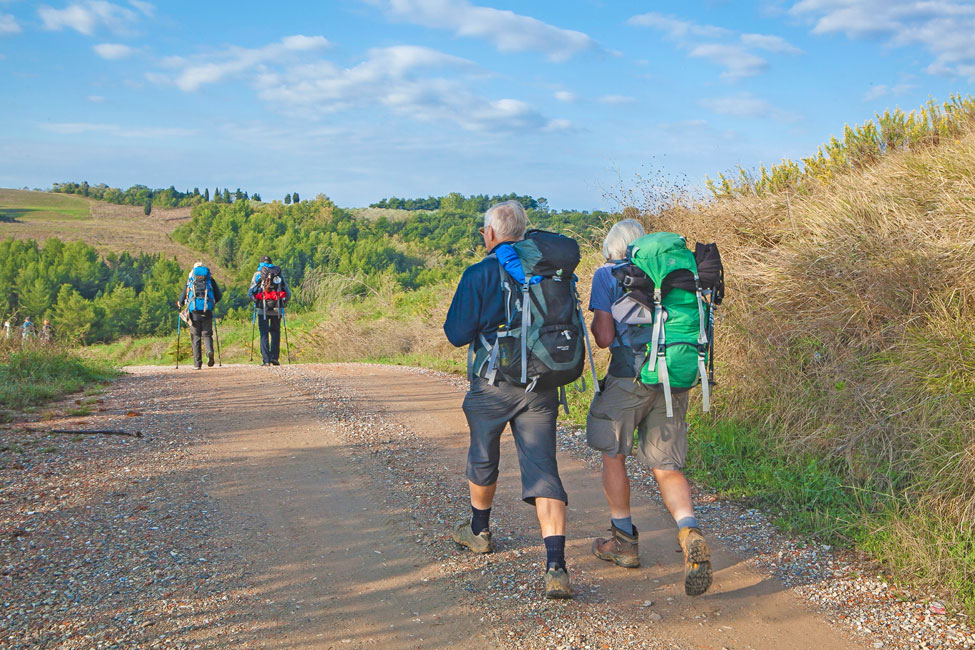 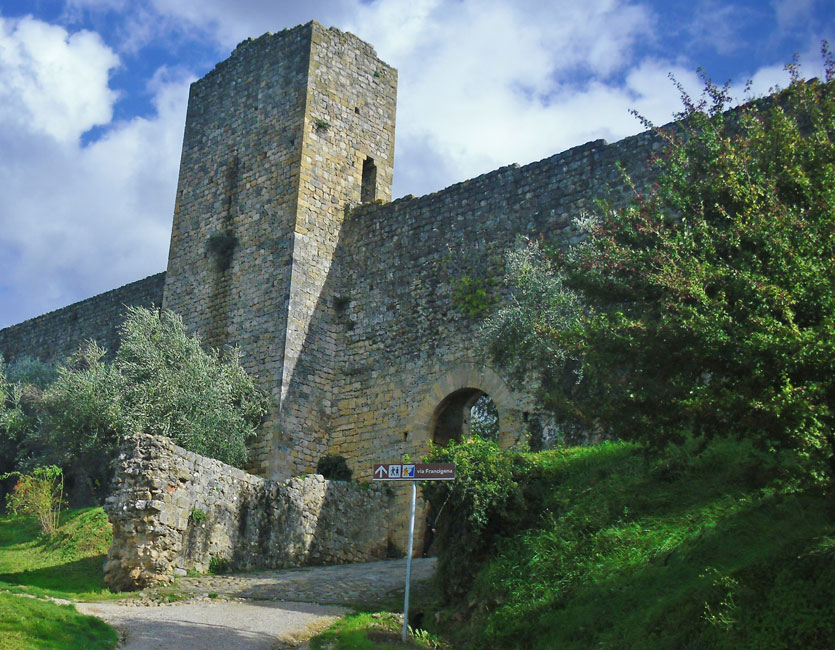 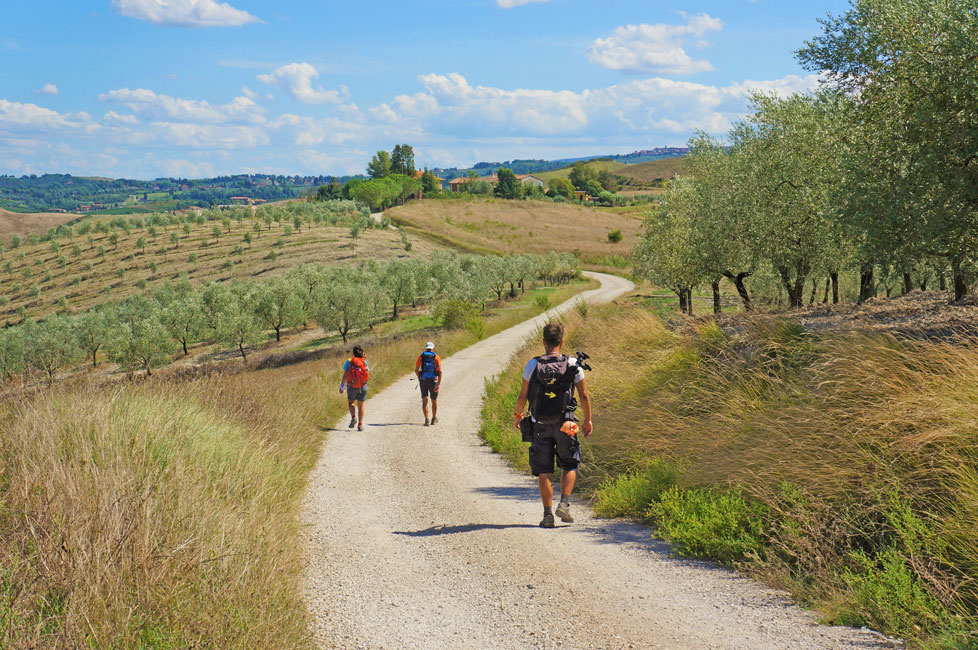