Walk among the dunes, heather and wildflowers of Skagen Odde, one of Europe’s largest sand spits.

Discover weird and wonderful sights such as the Sand-Covered Church and the ‘desert’ of Råbjerg Mile.

Kick off your boots and feel the sand between your toes on pristine wide sandy beaches.

Walk the North Sea Trail from Hirtshals to Skagen

On this 5-day hiking holiday you will walk a spectacular coastal stretch of the North Sea Trail between the fishing ports of Hirtshals and Skagen. You will follow first the North Sea and then the Baltic coastline and you can continue to where the waves of the two seas collide at Grenen, Denmark’s northern tip. Along the way you will discover a stunning landscape shaped by the force of nature and dominated by migrating sand dunes and beautiful duneland forests.

Beginning at the iconic Hirtshals Lighthouse, you make your way along forest paths, riverside, and pristine beaches to the charming seaside village of Tversted. You continue along the west coast before crossing the peninsula via Råbjerg Mile, a mini desert of migrating inland dunes which are still making their way eastwards at a rate of 15-20 metres per year. At Råbjerg Mile you connect to the eastern section of the North Sea trail, which you follow through the protected Duneland forest of Bunken Klitplantage to the small hamlet of Hulsig. You are now in the heart of Skagen Odde. Known as ‘the skaw’ in English, this sandy peninsula is one of Europe’s largest spit systems. Over the course of thousands of years, this spit of land gradually rose from the sea. It was shaped by the strong winds and waves, with continuous deposits of marine sand moved in a north-east direction by longshore currents.

Your final day takes you first along the more secluded beaches of the East Coast, before turning inland through the heathland and woods of Skagen Klitplantage. Here you will discover the Tilsandede Kirke (sand-covered church). Once the largest church in the region, it has gradually been buried by the migrating dunes. In fact, the congregation used to dig their way in for services before the struggle against the sand was finally given up in 1795. Today only the church tower remains, as a perfect illustration of the formidable natural phenomenon of sand drift in this region. Your trip ends in the fishing port of Skagen. Skagen is renowned for its wonderful natural light, which has attracted many of Denmark’s great painters to make the town their own. It is also home to some excellent seafood restaurants, providing a fitting way to end this short walking holiday on the North Sea Trail.

6000-8000 years ago, Hirtshals was actually the most northerly point of Denmark! The town itself, however, is not very old. The town plan was drawn by the architect Steen Eiler Rasmussen as late as the 1920s. There was only a single farm there at the time, but when the harbour was finished in 1930 a big group of fishermen decided to settle in the town. The harbour and the town are closely connected today by Den Grønne Plads (The Green Square) and the large, characteristic monument Trappen (The Staircase). Consequently, the activities at the old fishing port and the town life melt together and creates a unique and authentic atmosphere.

You will be staying right next to the sea in the western part of town close to the impressive, elevated lighthouse, which is well worth a visit for the fantastic view from the top!

On your first hiking day you will walk from east to west along the coast to the small and charming seaside village of Tversted. A large part of the route follows peaceful forest trails through the dune plantations of Lilleheden and Uggerby. After 14½ km you reach the Uggerby Å river, whose tranquil waters are popular for canoeing and trout fishing. Crossing the bridge, you then follow a raised boardwalk along the bank of the river which leads you to yet another pristine white sandy beach. You walk along the beach until you reach another stream – Tversted Å. Follow a sandy path upstream which will take you to the Café Fisk seafood restaurant in the centre of Tversted.

The first part of today’s route takes you through the beautiful dune plantation of Tversted Woods. You will pass some small idyllic forest lakes, followed by the thatched Østerklit mill – the last working roof mill in Denmark. Shortly after Skiveren campsite (where you can stop for lunch at the café), you descend from the high dunes onto the beach, via a wooden staircase. You follow the beach for almost 4 km, then turn inland onto a narrow sandy path amid heather and moorland. Gradually, the dazzling white sands of the drifting inland dunes of Råbjerg Mile come into view. You will cross the edge of the 40-metre high dunes before following more peaceful forest paths through the Bunken dune plantation to the sleepy hamlet of Hulsig.

A shorter stage today, as you make your way along the east coast of the sand spit known as Skagen Odde. A quiet tree-lined road takes you through the picturesque Hulsig Heath. This takes you to yet another idyllic beach, this time on Jutland’s more sheltered east coast, on the shores of the Kattegat (Baltic). After 4 km you turn inland toward the woods of the Skagen dune plantation. Here you will find another example of the spectacular forces of nature at work in this region: the picturesque whitewashed tower of Den Tilsandede Kirke, (sand-covered church). The tower is all that remains of what was once the region’s biggest church, the main part of the church having fallen victim to the relentless sand drift over the centuries.

You will have plenty of time to explore the town of Skagen on arrival. Denmark’s most northerly town is characterised by its distinctive yellow houses with white-picket fences. Skagen is also renowned for its wonderful natural light, which attracted and inspired the famous Skagen painters to make the town their home. There are numerous galleries and museums in the town, as well as some excellent seafood restaurants located in the harbour’s iconic red fish warehouses.

Your walking holiday along the North Sea Trail comes to an end after breakfast this morning. However, we can warmly recommend an extra night in Skagen, so you have time to get to Grenen, which is the very tip of Denmark. Here you can observe the waves of the Kattegat (part of the Baltic Sea) and Skagerrak (part of the North Sea) crashing into each other. We have a great circular walk that takes in Grenen and the lovely village of Gammel Skagen (Old Skagen), if you feel like more hiking. 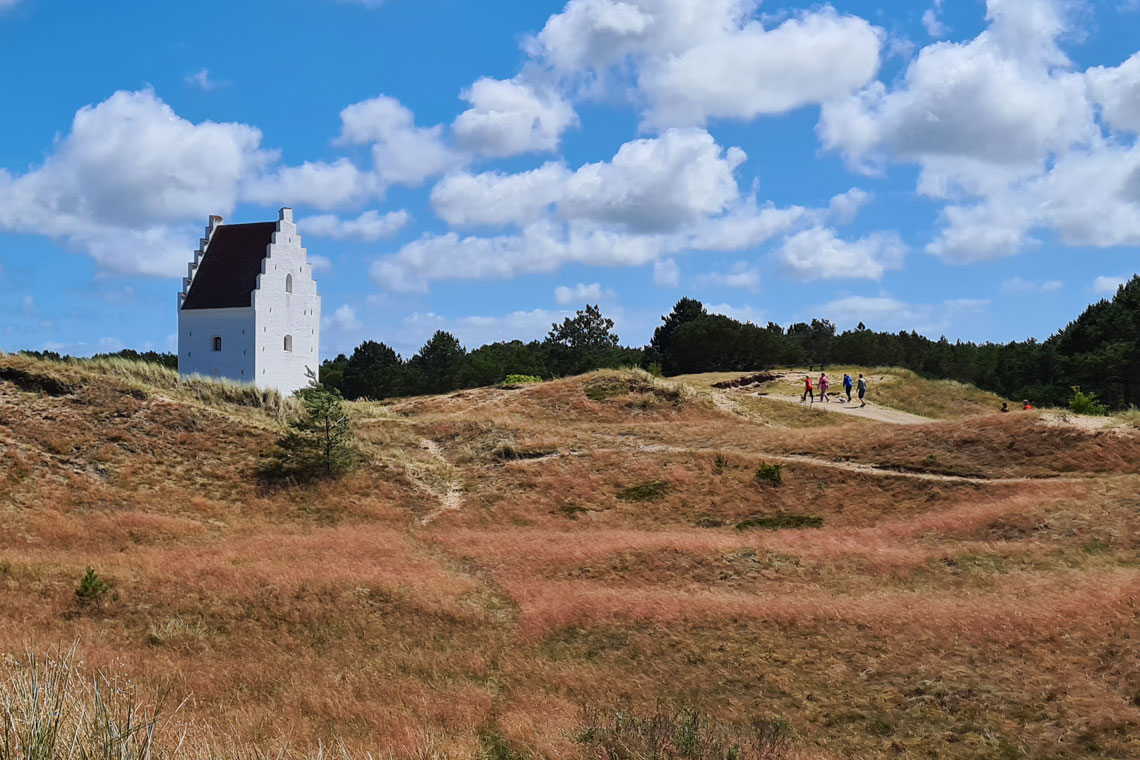