Easy going cycling around Apulia, ‘The heel of Italy’

Explore the gleaming ‘White City’ of Ostuni, perched on a Puglian hilltop

Overnight in Salento’s coastal towns of Gallipoli, Leuca and Otranto

Finish in Lecce, the stunning Baroque city of southern Italy

Puglia is Italy’s best kept secret for an outstanding and leisurely cycling holiday, with a gently rolling landscape of ancient olive groves, ancient walled cities, and invigorating coastal roads with magical views that will seduce you at every turn. From marvellous Monopoli to the UNESCO Trulli houses of Alberobello; from the gleaming ‘White City’ of Ostuni to the perfect white sand beaches of Gallipoli, enjoy superlative cycling through a remote part of Italy where time stands still, and everything seems to be extra colourful and perfectly Mediterranean. Strategically situated in south-eastern Italy, the region of Puglia prospered over the centuries under Greek, Roman, Ottoman and Spanish rule. This intricate layering of cultures is evident in the dialects, cuisine and architecture of this very distinctive region.

“Puglia is one of Italy’s most underrated regions, its abundance of history and one-of-a-kind architecture melded with an enviable coastline and one of Italy’s simplest, healthiest cuisines.” Lonely Planet.

The coastal town of Monopoli is easily accessible from the nearby airports of Bari or Brindisi. Arrive in this lovely coastal town overlooking the Adriatic Sea and take a stroll in its labyrinth of streets amidst whitewashed houses. In the afternoon you can enjoy the sea breeze while sipping a fresh local white wine and snacking on the typical local taralli.

Day 2: Cycle from Monopoli to Alberobello

Today’s ride is a gradual climb from the Adriatic Sea to the gently undulating Itria Valley. You will cycle through the typical Murgia landscape with olive groves and fields bordered by low stone walls. Stop for a break at Castellana Grotte and visit the immense underground cave system, one of the largest in Europe. Continue on to the famous UNESCO Heritage town of Alberobello, a truly unique place with over 1000 beehive-shaped trulli houses dating back to the 14th century.

Day 3: Cycle from Alberobello to Ostuni

Today’s cycle takes you through historic Murgia, built upon a karst plateau of olive groves, south-facing vineyards and classic masserie farmhouses. Pause to taste a little DOC wine in medieval Cisternino, then cycle out to the wonderful “White City” of Ostuni on the Adriatic Coast. Hidden behind massive town walls, the town’s centrepiece is a real Gothic treasure: the stunning 15thcentury Cathedral of Santa Maria Assunta.

Day 4: Train to Lecce and cycle to Gallipoli

After breakfast you roll down to Ostuni Station and catch the train to Lecce, where today’s cycling route begins. Ride into peaceful countryside on peaceful country roads through the olive groves. Linger in small historic towns like Copertino and Nardò, where you can refuel with a perfect cappuccino. On the final coastal stretch to Gallipoli, you’ll come upon many splendid spots for a refreshing swim in the Ionian Sea. Enjoy an evening stroll around this pretty baroque walled town.

Day 5: Cycle from Gallipoli to Leuca

Snaking along the coast to the southernmost tip of Puglia, you run out of land at the dramatic divide between the Ionian and Adriatic Seas. You can pause for a refreshing dip in the turquoise waters or relax on fine white sand of Torre del Pizzo beach. Suitably refreshed, ride onward to magnificent Santa Maria di Leuca. Situated in a stunning bay between Punta Ristola and Punta Meliso, the town has been popular resort for wealthy Puglians since the early 1900s.

Day 6: Cycle from Leuca to Otranto

Soak up the salty sea breeze on today’s coastal cycling route, winding gently along the clifftops with phenomenally distracting views. Just north of Castro, you can make a stop at the fascinating Grotta Zinzulusa, the most famous sea cave along the Puglia coastline. Finally, you reach Otranto, a Greco Roman port town frequented over the centuries by merchants and thrill-seekers. Otranto is Italy’s easternmost town and on a clear day it is possible to see over the Strait of Otranto to Albania. In the afternoon you can wander among the atmospheric alleys in the historic centre, which has been listed among the most beautiful towns in Italy.

Day 7: Cycle from Otranto to Lecce

Heading north fromj Otranto this morning, you cycle through the protected oasis of the Alimini Lakes, cruising along between fresh- and saltwater. You then make your way through the countryside of Greek Salento, where traces of the former colonies are still present in the dialect, traditional cuisine and bright architectural styles. The brilliant whites of the buildings really stand out against the backdrop of the cobalt blue sea. Finally you reach the beautiful baroque city of Lecce, known as the “Florence of the South” and a fitting place to end a wonderful week of cycling in Puglia.

Your Puglia cycling trip comes to an end this morning after breakfast this morning, unless you have booked any extra nights in Lecce. 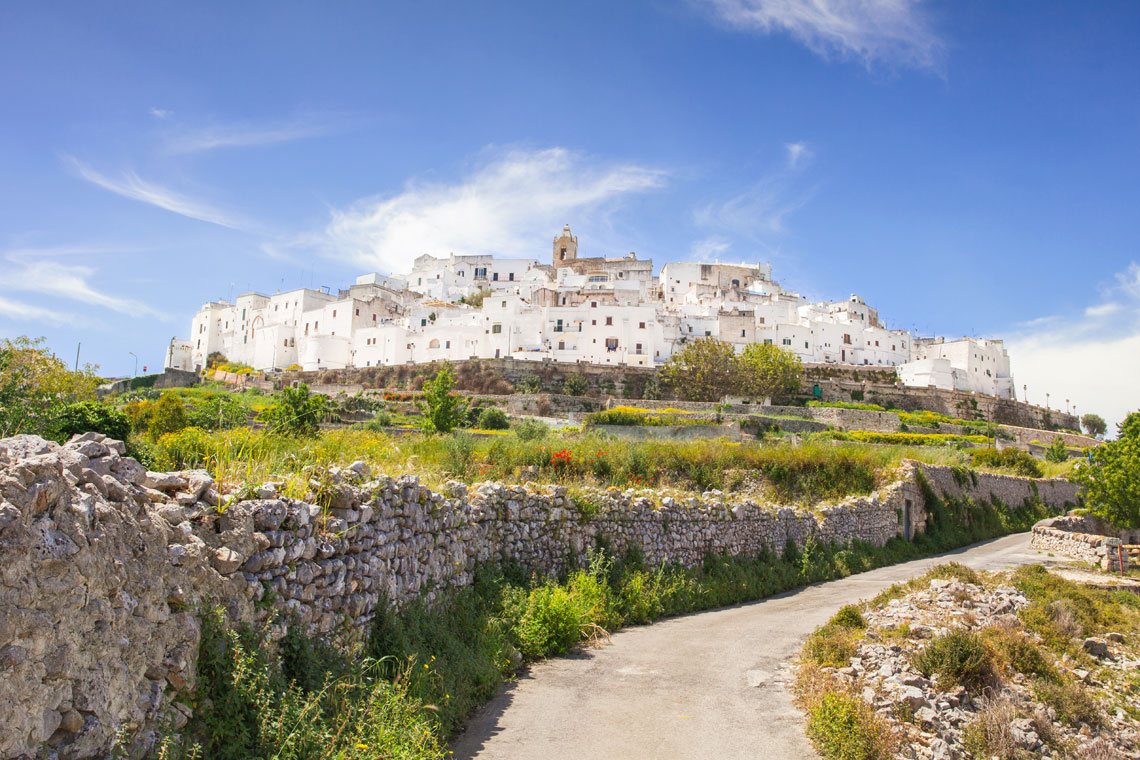