Cycling through the peaceful rural landscapes of polders, canals, windmills and tulip fields

The handsome city of Haarlem, famed for its impressive churches and numerous markets

The old market square in picturesque Delft, one of the region’s best-preserved towns

Gouda; the quintessential Dutch country town, renowned for its cheeses

This 7-day cycling holiday takes you through the surprisingly rural and peaceful countryside of the Dutch Randstad. The Randstad – literally meaning “rim town” – is a string of charming towns located in a quintessentially Dutch landscape of flat fields, farmhouses, windmills and tranquil canals, still reminiscent of the classic paintings of the 17th century. As well as the idyllic countryside, this self-guided cycling holiday takes in the culturally rich cities and towns of Amsterdam, Haarlem, Leiden, Delft and Gouda; each unique and all brimming with that typical Olde Holland character. Cycling distances are relatively short allowing more time for sightseeing and museums. The cycling is easy on the flat, quiet roads and bike lanes. In short, this route offers seven days of cultural gems and idyllic countryside.

Make sure you arrive early so that you have time to wander around the gorgeous jumble of ancient cobbled streets, 17th century townhouses and pretty canals. If you like bustle, make your way to the city’s famous squares: Dam, Rembrandtplein and Leidseplein. Alternatively, if you prefer to roam off the beaten track, take a stroll up Brouwersgracht or hire a canal boat and find out what the city looks like from the water.

If you like you can get an early start this morning and beat the queues at the Van Gogh or Anne Frank museum. Then say “tot ziens!” to amazing Amsterdam and mount your bike to begin your cycling adventure through Kennemerland, where a great variety of idyllic countryside awaits; this is a region of vast polders, wild(life) gardens, country estates, forests and beautiful peatland. You will stay overnight in the elegant city of Haarlem. The attractive city centre offers a wealth of possibilities for shopping, delving into art and culture, or relaxing in cafes and restaurants. In April and early May, you have the option of cycling a longer route of ca. 60 km where you can see the tulip fields.

Haarlem is a handsome town that deserves thorough exploration. We recommend a city walk to discover the city’s hidden hofjes. A hofje is a square of tiny almshouses set around an idyllic courtyard. Also dating back to the Dutch Golden Age, the works of Haarlem painter Frans Hals (group portraiture) and his townsmen including Jacob Ruysdael (land- and seascapes) and Pieter Saenredam (church interiors) are on display at the Frans Hals museum.
In the afternoon get set for a colourful bike trip through the Dune and Bulb Region. Try to time this holiday before mid-May to capture the bulb flower fields in their full splendour! Tulips, crocuses, daffodils and hyacinths temporarily transform the landscape into one of the country’s best-loved tourist attractions. Should you want to spend a day at world-famous Keukenhof flower exhibition, we recommend you book an extra night in Leiden. Holland’s oldest university town, Leiden has a very busy cultural events calendar and a friendly city centre with canals, monuments windmills and museums. The historical botanical gardens are especially worthy of a visit.

Leaving lively Leiden, peace and tranquility reign once again as you cycle past glistening lakes, green pastures, ancient windmills and farmhouses on your way to the famous city of Delft. Note all the orderly rectangles in this man-made polder landscape (mostly peatland reclamations). The melancholy charm of historic Delft is breath-taking. Most will associate Delft with its blue and white hand-painted pottery: Delftware. But did you know that painter Johannes Vermeer (1632-1675) lived in Delft all his life? The Vermeer Centre gives illuminating insights into his life, works and hometown (although no original paintings are on show here).

This stretch of your cycling tour takes you through the Green Heart of Holland: a stronghold against urban sprawl in the Randstad conurbation. Balancing atop polder dikes, delight in characteristic villages, distant horizons and pleasingly strict rectangles cut by ditches in fields of vibrant green.

Your destination today is Gouda; the quintessential Dutch country town, with an ancient and charming town centre encircled by peaceful canals. Don’t miss the gothic town hall (1450), the Weighing House (1667) and the stained-glass windows in St. John’s Church. The town was an important centre for cloth trading in medieval times and still boasts the largest market in Holland. Gouda is also famous for making syrup waffles (try one hot!) and candles. If you’re travelling in Summer, plan your trip so that you can witness the traditional Thursday morning cheese market at the start of Day 6 (early April until the last Thursday in August).

After a hearty breakfast at your hotel, get back on your bike and set off on the longest leg of this bike tour! Bird lovers bring your binoculars! Once again, switch on your five senses to fully enjoy the characteristic countryside of the Green Heart. Drift past meadows, lakes and small villages. Can you hear the wind in the rushes? Did you see the clouds reflected in the lake? Are you feeling peckish? In that case, do stop to sample Dutch style apple tart with your coffee! Thus fortified, continue on your way back to Amsterdam along the beautiful River Amstel.

*Note: If the prospect of 79 km seems a bit daunting, there is also the option to split this leg by booking an extra night in Woerden (making two legs: 43 km and 49 km).

Your cycling holiday comes to an end after breakfast this morning, unless you have booked any extra nights. 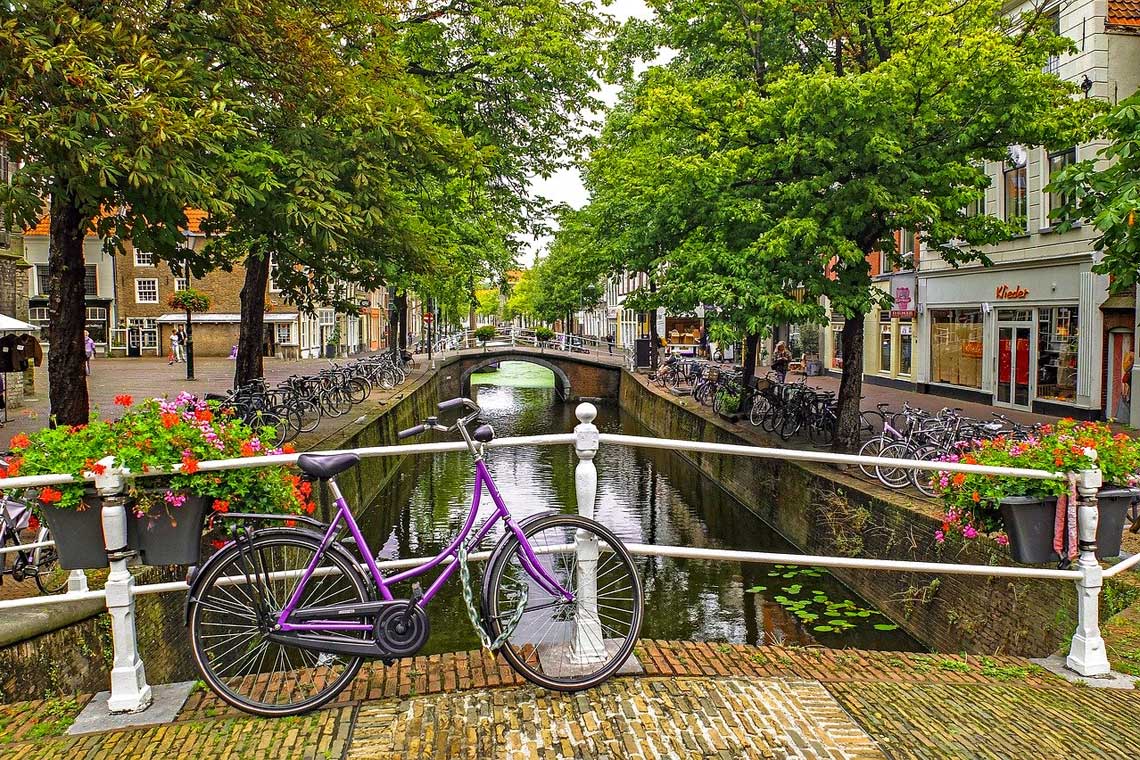