Hiking in the footsteps of the “Fairytale King”

Enjoy wonderful distant views of the Alps, getting ever closer throughout the week

Adventurous walking through the Ammer and Pöllatschlucht gorges

On this week-long walking holiday, you will follow the King Ludwig Way from beautiful Lake Starnberg to the iconic castles of Füssen.

The King Ludwig Way was named in honour of the Bavarian King Ludwig II, who reigned over the independent mountain kingdom from 1864 until his death in 1886. Ludwig was a keen walker himself, and this trail follows his favourite walking route through the Alpine foothills of Upper Bavaria. The trail begins at the shores of Lake Starnberg, the scene of Ludwig’s mysterious death, and ends at his most famous architectural masterpiece – the castle Neuschwanstein – and nearby castle Hohenschwangau in Füssen, where Ludwig spent most of his childhood. The scenery along the way is stunning; starting at the romantic Lakes Starnberg and Ammersee among gently rolling hills that become ever higher as you approach the mighty Alps. The highest point along the route is at Hohenpeissenberg (988 m), which is regarded as having the finest panoramic view of any Bavarian mountain. You will also pass numerous significant cultural and religious sites, including abbeys, monasteries and frescoed churches. You will stay in very comfortable hotels and guesthouses in charming Bavarian villages and there are many opportunities to quench your thirst at inviting beer gardens along the way!

Your journey begins in the pretty hamlet of Bernried on the shore of tranquil Lake Starnberg. If you arrive in time it is well worth taking the ferry over to Berg to visit the chapel where King Ludwig’s remains were found.

Your first walking day on the King Ludwig Way leads you through a nature reserve along the banks of Lake Starnberg. As you reach the Ilka Cave you will enjoy a stunning view over the lake. You will pass through pretty Bavarian villages with inviting beer gardens before reaching Andechs monastery (where you can enjoy more beer at the on-site brewery!). Then a short bus ride takes you to the lakeside resort of Herrsching, where you catch the ferry across Lake Ammersee to Dießen.

Day 3: From Dießen to Wessobrunn

From Dießen the path leads you past the stunning Baroque Marienmünster Church, then over beautiful meadows and into the peaceful Stiller Forest. A pleasant hilltop trail then takes you to Wessobrunn, home of the ‘Grey Duke’ (a historic bell tower). You will have wonderful views along this final section, including your first distant glimpse of the mighty Zugspitze, Germany’s highest peak.

Day 4: From Wessobrunn to Peiting

Today’s route takes you through remote moorland and sleepy villages in the foothills of the Bavarian Alps. A steep ascent will bring you to the summit of the Hohenpeissenberg (988 m), the highest point on King Ludwig’s Way. From here, you will enjoy panoramic views of the Alps and Allgäu region. There is a summit café with a scenic lounge which makes an ideal lunch stop. You then continue downhill through forests and across fields all the way to Peiting.

A spectacular and adventurous waking route today, through the untamed and romantic Ammerschlucht Gorge. A series of small bridges take you through the ravine high above the river Ammer all the way to the ornate Rottenbuch Abbey. You then continue across hills and meadows to the village of Wildsteig, with glorious views to the Alps which are getting ever closer!

This morning you will walk through lonely forests and over idyllic moorland to the world-famous UNESCO world heritage pilgrimage Kirche in der Wies (church in the meadow). You then continue through gentle countryside, forests and flower-filled meadows to Buching.

Day 7: From Buching to Füssen

The final stage of the King Ludwig Way is among the very best walks in Germany. You set off across nature reserves and past Lake Hegratsried. Then you can either continue on the lakeside path along Lake Forggensee to Füssen or opt for a more challenging ascent via the Pöllatschlucht gorge to King Ludwig’s fairy-tale Neuschwanstein Castle. Finally you walk through woodland along the Austrian border to the historic market town of Füssen, where the King Ludwig Way ends.

Your walking holiday on the King Ludwig Way comes to an end after breakfast this morning, unless you have booked any additional services with us. We highly recommend an additional night in Füssen to properly explore the castles and other wonderful attractions around this town. Please enquire for an extension price. 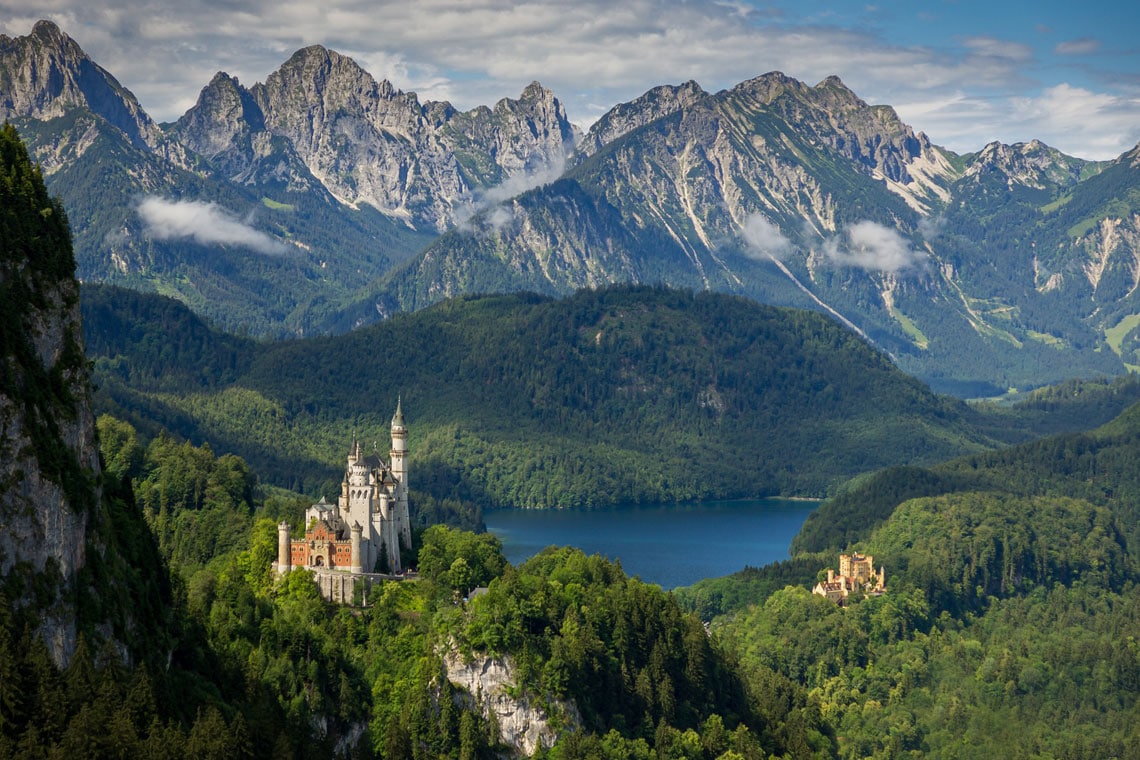