Walk in the footsteps of the old bargemen along Denmark’s longest river, the tranquil Gudenåen.

Experience true Danish ‘hygge’ and traditional cuisine in the old inns on the banks of Gudenåen.

Feel the presence of 4,000 years of history as you follow the Danish Camino, Hærvejen.

Enjoy some of Denmark’s most scenic landscapes around Lake Hald and the hills of Dollerup.

This 8-day hiking holiday is called ‘Jutland’s Heritage Trail’ because it combines two of the most important historical walking routes in the region: the old towpath, Trækstien, and the ancient pilgrim and trading route, Hærvejen. It starts in the beautiful lake district capital of Silkeborg, which has a lot to offer, including Hjejlen, the world’s oldest original coal-fired paddle steamer still in operation, as well as the AQUA Aquarium & Wildlife Park and a museum dedicated to the famous Danish painter Asger Jorn.

From Silkeborg, you follow the old towpath, Trækstien, along Denmark’s longest river, Gudenåen, and its adjoining lakes. Historically, the trail was created for horses and bargemen, who once pulled great barges filled with goods between the towns of Silkeborg and Randers. Today it is a beautiful walking trail through Jutland’s tranquil lakelands. You will stay overnight at two of the charming old inns used by the bargemen in the 19th century. On the last part of the track towards Bjerringbro you will walk along the lake Tange Sø, which is the largest artificial lake in Denmark. At the north end of the lake you find the largest hydro-electric power station in Denmark, where you can visit Energimuseet (The Energy Museum), which offers a variety of experiences for the whole family. After another few kilometers along Gudenåen you reach Bjerringbro. From here you take the train to Jutland’s old capital Viborg, which is the starting point for the next part of your trip along Hærvejen – Denmark’s oldest and most famous hiking route.

It is believed that Hærvejen was in use for more than 4,000 years for the transport of animals and goods, for pilgrims, for the armies and for the kings and their followers. It remained the most important route through Jutland until the appearance of the railways. The trail runs along the watershed of the Jutland Peninsula, known as the ‘Jyske Højderyg’ (Jutland Ridge) all the way from Viborg to Hamburg in Germany. By using this route, it was possible to avoid rivers, or at least ford them close to their origins where they were still shallow. As time went by the route was improved with paved fords, embankments and bridges.

The route was designated as a European Cultural Route in 2010 and the tourist offices in the surrounding towns have established a dedicated website with a detailed description of the route, as well as sites of interest along the way: www.haervej.com.

On the stage from Viborg to Lake Bølling you will find many historical sites surrounded by scenic, tranquil landscapes as you wander through woodland and heath, over rolling hills and along serene lakes.

After your last walking stage, you take the train back to Silkeborg (12 min.) where you started. Here you can celebrate the end of an exciting hiking week with a good dinner and a final night in the comfortable hotel.

Your hiking holiday starts in the lake district capital of Silkeborg, where you stay in a comfortable 4* hotel. If possible, you should arrive early, so you have time to explore the charming town that has a lot to offer tourists. We recommend a trip on the beautiful lakes with Hjejlen, which is the world’s oldest original coal-fired paddle steamer still in use. You can also visit Museum Silkeborg where you will find the famous and well-preserved bog body Tollund Man, the AQUA Aquarium & Wildlife Park, or the museum dedicated to the famous Danish painter Asger Jorn.

On your first hiking day you start out from Silkeborg and walk along Gudenåen (Denmark’s longest river) and its adjoining lakes following the old towpath, Trækstien. The trail has been extensively renovated over the last few years, with a raised gravel track enabling you to walk with dry feet in this flood-prone area. On the first part of the track, you walk along the lake Silkeborg Langsø, before continuing along Gudenåen. Shortly before Svostrup the river widens out in the lake Sminge Sø; famous for its bird life, which you can observe from a bird tower. In Sminge Sø, Gudenåen is joined by another big stream: Gjern Å. Shortly after that you reach your next accommodation; the old inn, Svostrup Kro, where the bargemen traditionally stopped for a well-deserved rest and refreshment!

Today you continue along Trækstien towards Kongensbro. This part of Trækstien was previously susceptible to flooding by Gudenåen, but in the spring of 2019 the path was renovated and raised, so that it now remains dry throughout most of the season.

Shortly after having left Svostrup you will see Tvilum church on the opposite site of the river. The church was built in 1250 as an abbey for the Order of Saint Augustine. It was also used for overnight stays by the king of Denmark in medieval times on his travels around Jutland, as evidenced by some newly discovered murals dating from 1350.

You continue your walk along the river through an idyllic and peaceful landscape, finishing up at Kongensbro Kro, another charming inn with an atmosphere of times gone by. In earlier times the inn was an important junction for the traffic between Silkeborg/Randers and Aarhus/Viborg.

Day 4: Kongensbro to Bjerringbro and train to Viborg

On your last walking day along Trækstien, the route has in some places been diverted into the woodlands along Gudenåen due to the risk of flooding. After 7 km you pass a bridge over Tange Sø to the village of Ans, where it’s possible to take a small detour for lunch at yet another old inn.

After Ans, Gudenåen runs into Tange Sø, which is the largest artificial lake in Denmark. The old towpath now lies at the bottom of the lake together with the remains of an old rural hamlet. You follow the trail along the eastern side of Tange Sø and at the north end of the lake you reach Gudenåcentralen, the largest hydro-electric power station in Denmark, which opened in 1921 and once provided 25 % of the electricity used in Jutland. The power station is also home to the Energy Museum with a variety of experiences for the whole family. After another 4 km along Gudenåen you reach the end of the stage in Bjerringbro.

From Bjerringbro you take the train to Viborg (17 min.) where you check into a lovely B&B in the centre of town. Viborg is an old episcopal residence and was Jutland’s most important city during the Middle Ages. In the beautiful old town centre with the cobbled streets, you can still sense the medieval atmosphere.

You now begin the second half of your trip, which follows the 4,000-year-old transport and pilgrim route, Hærvejen. Starting from Viborg Station, you follow the trail south to the broad forest paths of Liseborg Plantage. For the next 8 km you will be walking along quiet forest paths through Viborg Hedeplantage, Viborg Krat and Langskov.

As you approach the lake Hald Sø, you walk closely past the culture centre Hald Hovedgård, which has an exhibition about the area’s landscape and history in the old barn. Afterwards, you reach the old inn Niels Bugges Kro, which was originally an old mill belonging to Hald Hovedgård. You continue south along Hald Sø to the lovely, protected hills of Dollerup Bakker covered in gnarled oak trees, junipers and heath. This is one of the most beautiful stretches on Hærvejen offering wonderful views over the rolling hills with grazing horses and the deep-blue lake. The stage finishes in the little village of Dollerup close to the southernmost end of the lake.

Shortly after leaving Dollerup, you walk through the small village of Skelhøje where you can stock up in the local grocer. After Skelhøje follows a stretch along fields before quiet forest tracks lead you through Havredal and Stendal Plantage where you will see many protected burial mounds and old holloway tracks. Stendal Plantage, established in 1788 in an attempt to reclaim the heath, was Denmark’s first state-funded plantation.

The route continues through Ulvedal Plantage where the outlaw Jens Langkniv (Langkniv means ‘long knife’) lived in the end of the 16th century and have had a 5,500-year-old long burial tomb named after him.

After Ulvedal Plantage, you will take a detour of almost two kilometres away from Hærvejen to the village of Thorning. Here you can visit the former rectory of the famous Danish writer Steen Steensen Blicher, which now houses a museum dedicated to him and the surrounding area. Your accommodation is located a further 2 km away along a quiet country road.

After breakfast you walk back to the middle of Thorning (ask your hosts for a lift if you prefer). From here you walk south and pass through the village of Nørre Knudstrup. After 3 km you will be reunited with Hærvejen.

Shortly after, you pass the Haller Å stream, where the deep tracks from old carts are still visible leading down to the ford. Here you will also find King Knap’s Dike, which is a 200 m long rampart from the Iron Age. It is also in this area that the Battle of Grathe Heath took place. Today, the heath is an idyllic spot, but on the 23rd of October 1157 it was a battle scene where a bloody civil war led by the kings Svend Grathe and Valdemar the Great came to an end. Valdemar emerged triumphant and Svend was executed at the stroke of an axe.

You continue through Kompedal Plantage, where conscientious objectors were once condemned to forest work. South of here, in Stenholt Forest, you leave Hærvejen to follow a nature trail to Lake Bølling, which marks the end of your route. If you have time, you should visit the nearby Klosterlund Museum with findings from some of the oldest settlements in Jutland dating back 8,000 years.

From the nearby train station in Engesvang, you take the train back to Silkeborg (12 min.) where it all started. Celebrate the end of an exciting hiking week with a good dinner and another night in the comfortable 4* hotel.

Your trip comes to an end after breakfast, unless you have booked extra nights. You can continue your onward journey from Silkeborg Station.

Getting to and from Silkeborg 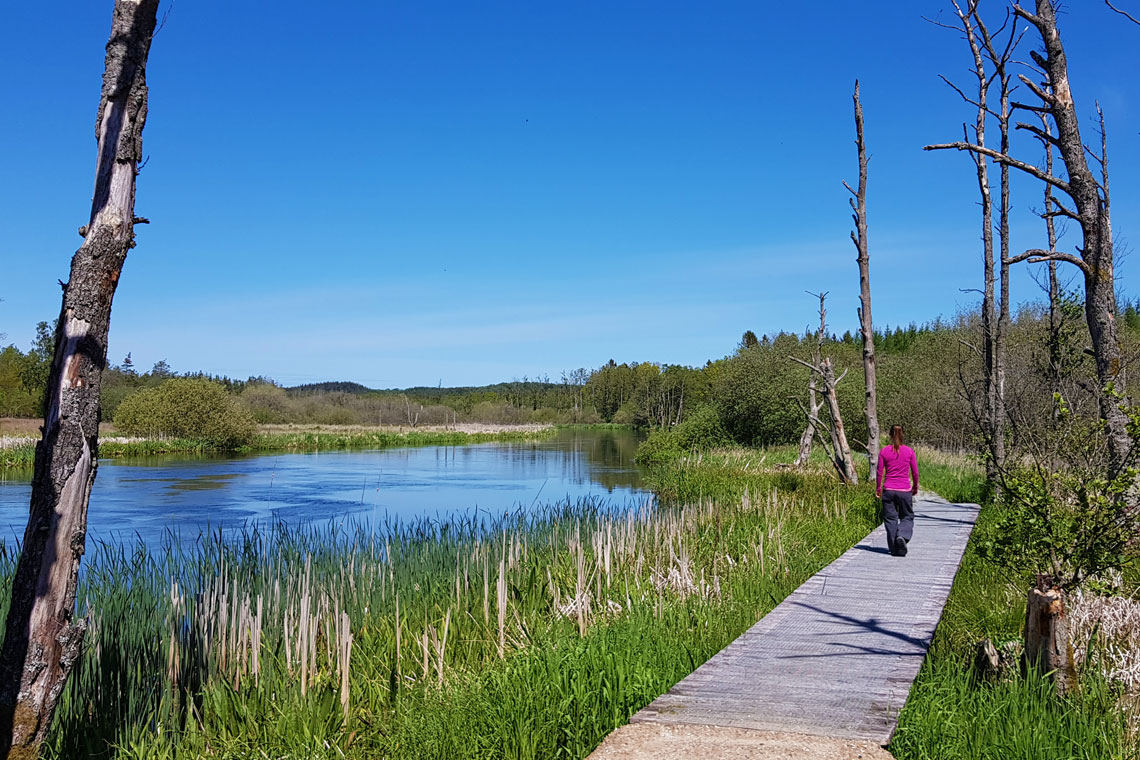 We had six perfect days of walking through historic Jutland – the first three days were along a restored towpath followed by three more days following an ancient woodland trail. Wild Rover Travel created a fantastic itinerary with great accommodations and luggage transfers. The hotels and inns along the towpath were historic and charming; the B&B’s in the second part of our walk were friendly and welcoming. The downloaded GPX route maps were fantastic and the route notes were full of interesting historical and cultural information of all the places we walked through. We look forward to signing up for another walk!

I loved it! The scenery was breathtaking; the innkeepers were gracious and friendly and really added to the feel of the trip. The only problem I had was with the many pages of directions near the end of the route. I’m not great with directions anyway and I kept thinking I was lost. Thankfully, lots of kind people along the way helped me.This was a way for me to see Denmark, land of my ancestors, as I’m sure I never could have otherwise.