Hiking in the rugged & rocky world of Saxon Switzerland

Dramatic, craggy mountains and sandstone rock needles amid an ocean of greenery

The spectacular and much-photographed Bastei Bridge, standing 200 metres above the Elbe

The impressive and imposing Königstein Fortress, the largest of its kind in Europe

Cross into the Czech Republic and hike to the Pravčická brána, the largest natural rock arch in Europe

Hiking in the Elbe Sandstone Mountains: The Painters’ Trail

The Elbe Sandstone Mountains offer a wonderful walking experience in an incredibly captivating corner of Germany and the Czech Republic. For centuries, this region has fascinated nature lovers and hikers. Around 1,200 kilometres of designated hiking trails lead through tranquil forests and mystical valleys, over lofty peaks and past complex rock formations to reveal breathtaking, panoramic views at every turn. Due to its scenic beauty, the region was also much favoured by the artists of the German Romantic school, such as Caspar David Friedrich, and much of this hiking route follows the famous Malerweg or Painters’ Trail.

Located in the Elbe valley, south-east of Dresden, the region is also known as Saxon Switzerland. This nickname was given by two Swiss painters of the 18th century, who felt the landscape was reminiscent of their homeland. Likewise, the adjacent Czech part of the Elbe Sandstone Mountains became known as the Bohemian Switzerland.

With its chalky sandstone cliffs, deeply carved valleys, jagged ridges and gorges, this fascinating landscape is completely unique in central Europe. During your hiking holiday you will see famous sights such as the Bastei Bridge near Rathen, the Königstein Fortress and the Rock Arch Pravčická Brána in Bohemian Switzerland (the largest natural stone bridge in Europe). But the tour will also take you to attractions lesser-known such as Schrammsteine and Paffenstein with the ‘Barbarine’ rock needle.

Your walking holiday begins and ends in the picturesque little spa town of Bad Schandau on the banks of the river Elbe. Bad Schandau is the gateway for active holidays in Saxon Switzerland and is easily reachable by direct train from Berlin, Dresden or Prague. After checking in to your hotel, you can take a pleasant stroll around the town’s medieval centre or along the banks of the Elbe, admiring the town’s stunning natural surroundings which you will explore over the next few days.

Day 2: From Bad Schandau to Rathen via Hohnstein Castle

Your first walking day with a steady climb through the forest to reach the famous viewing point of the Brand, known as the “Balcony of the Saxon Switzerland National Park”.  From here you will enjoy a breathtaking view over the Elbe river valley and the dramatic landscape of the Elbe sandstone mountains. You then continue your hike to the impressive Hohnstein Castle, followed by an ascent through the Wolfsschlucht gorge to the Hockstein. The last part of today’s hiking tour takes you through idyllic ravines and forests, past the tranquil Amsel Lake to the spa town Rathen.

Today’s walk starts with an ascent from the village of Rathen to the famous Bastei Bridge, a sandstone bridge carved through a stunning rock formation nearly 200m above the village. Starting early will enable you to enjoy this magical place in wonderful tranquillity. You then hike through the forests and gorges of the Höllengrund and Wehlener Grund to the picturesque riverside town of Wehlen. Here you will cross the Elbe by ferry and soon reach Rauenstein rock formation. Via staircases and ladders you will climb to the top of the rock, where you will be rewarded with stunning views of the Bastei Rocks and surrounding landscape.

Today’s final destination is Königstein with its imposing and formidable fortress, which is the largest in Europe.

From Königstein, you will follow easy and pleasant forest paths to the impressive Barbarine rock needle, one of the most famous landmarks of the Saxon Switzerland National Park. You then ascend to the top of the table mountain Pfaffenstein, with wonderful views in all directions. Today’s destination is the pretty spa town of Gohrisch, which your reach via the Musel path (Muselweg).

The first part of today’s walk takes you gently uphill, through fields and meadows, before climbing first the Gohrisch (448 metres) and then the Papststein (451 metres). From both rock formations you will have wonderful views over the Saxon Switzerland National Park. Passing the Kleinhennersdorfer Höhlen caves and continuing through the Liethen Valley, you will finally arrive in the riverside village of Krippen.

Day 6: Into the Czech Republic – Hrensko and the Pravčická brána Rock Arch

Don’t forget your passport this morning, as you begin by taking a short train ride across the border to the town of Hřensko in the Czech Republic. Your hiking route from there to the impressive Pravčická brána (in German Prebischtor), the largest natural rock arch in Europe.

Descending to the tranquil Kamenice river, you will take a gentle boat trip through the Edmundsklamm gorge back to Hřensko (boat fare to be paid locally). Then take the train (S-Bahn) back to Krippen.

You cross the Elbe by ferry (payable locally) this morning to begin your final hike. After a gentle walk on forest paths you will have an arduous ascent via steel ladders and staircases to the jagged rocks and ridge of the Schrammsteine. It is well worth the effort because a breathtaking view over the entire Elbe Sandstone Mountains awaits you.

Continuing via the Malerweg Trail (Painter’s Path), you will reach the Lichtenhain waterfall. From here you take the bus or the historic Kirnitzschtalbahn tram back to Bad Schandau (not included in tour price).

Your walking holiday comes to an end after breakfast this morning, unless you have booked any additional services with us. We would be happy to arrange additional nights in the region or in Dresden. Please enquire at the time of booking. 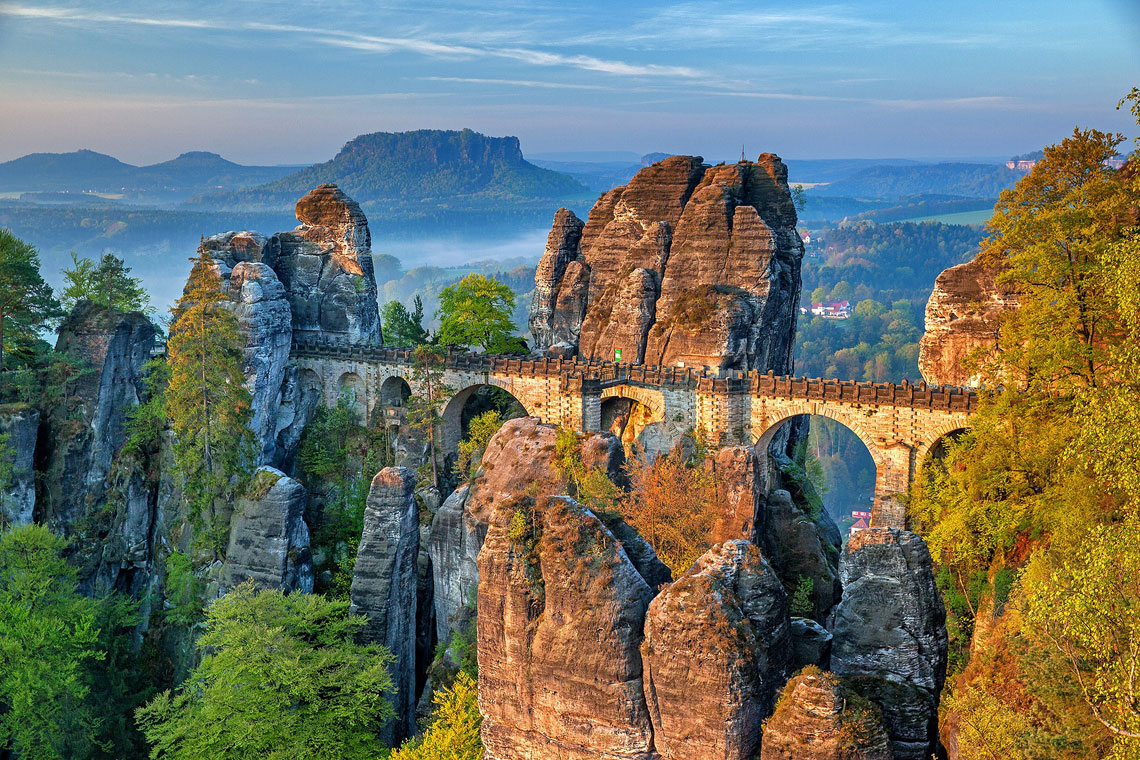