Walk from coast to coast alongside the iconic Roman Wall

Walk alongside an iconic British landmark from coast to coast.

Explore the wild and beautiful moors, crags, and valleys of the borderlands.

Immerse yourself in northern England’s Roman heritage at the many historic sites and museums.

Enjoy the hospitality of country B&Bs brimming with personality and local charm.

Discover the vibrant, modern city of Newcastle and the contrasting medieval city of Carlisle.

The Hadrian’s Wall Path is a 135 km long National Trail that crosses northern England, following the course of the wall closely along its entire length from the North Sea to the Irish Sea.

Hadrian’s Wall, also known as the Roman Wall, is a former defensive fortification of the Roman province of Britannia, begun in AD 122 in the reign of the emperor Hadrian. Its purpose was to guard the northern frontier of the Roman Empire from hostile Scottish tribes. Running from Wallsend, Newcastle in the east to Bowness-on-Solway in the west, the Wall covered the whole width of the island and was manned and maintained for 300 years. Today, the wall is a UNESCO World Heritage Site.

The Hadrian’s Wall Path was opened as a National Trail in 2003, and quickly became one of Britain’s most popular long-distance walking routes. Following the line of the old Roman wall, the route passes through some of the most beautiful parts of northern England – from the rugged Northumberland National Park to the green pastoral scenes of the Eden valley. You will discover rolling fields and rugged borderlands as well as the vibrant cities of Newcastle and Carlisle – with dozens of fascinating museums along the way. As well as enjoying pleasant walking through remote moorlands and green pasture, you will find many fascinating historical sites, such as the Segendum Roman Baths in Wallsend, the Roman Army Museum at Greenhead, and Chesters Roman Fort at Chollerford.

Travel to Newcastle and then on to the coastal town of Whitley Bay (or Tynemouth of you prefer/ subject to availability). Stretch your legs and take the time to visit St Mary’s Island, Lighthouse and Visitor Centre where you can enjoy spectacular coastal views.

A short train ride takes you to Wallsend and the start of the Hadrian’s Wall Path. From Wallsend, the trail heads out following the walls of the ancient Roman fort of Segedunum. This is a multi-award-winning site, with reconstructions of a Roman Bath House and an excellent interactive museum.

Follow the old Tyne to Blyth railway line, now a footpath, which leads you the River Tyne at the Riverside Park. You come into the riverside area of downtown Newcastle-upon-Tyne, with vistas of the elegant Tyne Bridges and of the Newcastle skyline, including St. Nicholas Cathedral. There should be time to climb up to Newcastle Keep. Continue along the riverside path, which takes you out of the city. As you get to the old village of Newburn, the countryside really begins to open up. You are now in the county of Northumberland. Just before reaching Heddon-on-the-Wall, you turn off for Wylam and your overnight stop at the end of this flattish day.

After crossing over the River Tyne, you have your first steep ascent up to Heddon-on-the-Wall, where you will find an intact stretch of the wall. To beyond Chollerford now, the National Trail follows beside the roads that have been built over part of the wall. The wall itself became a source of material for the foundations of General Wade’s military road, and the trail often follows along the Vallum, the ancient ditch line created as a defensive feature when the wall was built. You pass the remains of Vindobala Roman Fort, before coming to a lovely old pub at East Wallhouses after about 10 km. You can also take a slight deviation to Halton after 14 km to admire the old keep.

Leaving Chollerford, you pass the Chesters Roman Fort and Museum. You continue to follow the road as far as Fozy Moss, where you reach the crags of the Whin Sill Escarpment. This stage roller coasters to Housesteads, with yet another Roman Fort and National Trust Museum. There are excellent views over the “Northward Tynescape” to the Bellingham and Simonside Hills. You now follow arguably the most scenic section of the trip; over the rugged Highshield Crags and then down via Peel Crags to Steel Rigg. From here it is a short walk to hamlets of Once Brewed and Twice Brewed.

Overnight: Once Brewed or Twice Brewed. We use a range of B&B ensuite accommodation.

Day 5: Housesteads to Lanercost or Walton

The wall climbs to its highest point over Windshields Crags, before descending to the delightfully named Bogle Hole. Then descending through Thorny Doors and up again to Cawfields Crags with excellent views onto the Pennines. The way passes by Great Chesters and Magnis (Roman forts), as wess as the ruin of medieval Thirlwall Castle, before crossing the Cumbria / Northumberland border on the River Irthing at Gilsand.

You can enjoy a refreshment break at either Gilsand or Banks before continuing along your way. The hamlet of Banks overlooks the Irthing Valley and Lanercost priory below. From here there are few signs of Hadrian’s Wall remaining so enjoy the last significant portion maintained by English Heritage at Hare Hill. There are lovely views over the Irthing Valley as the walk heads into Walton. This is easy walking along the edge of fields in the shade of some old hardwood trees. Walton is a small village with an interesting church in the centre beside the village green.

Overnight: Lancercost or Walton in a B&B or Farmhouse.

Day 6: Lanercost or Walton to Carlisle

The route continues across undulating countryside. After crossing the very attractive Cam beck, you briefly join the road at Newtown Village before skipping across the fields. Here you are following the wall line via Old Wall, Blea Head and Wallhead farms. You then follow a little “sandy lane” that takes you down to The Stanegate, the old Roman road that leads into Crosby-on-Eden, then following the riverside path along the River Eden. At Linstock there is a medieval ‘pele’, Peel Tower that rang in times of danger so that the locals could congregate within its fortifications.

Finally, crossing the River Eden, you reach Carlisle – a very interesting historical city, with a magnificent castle and cathedral. The inner city has been pedestrianised making exploration enjoyable around the market square. A lot of the buildings such as the castle and the Old Town Hall are made of fine red sandstone. Beer fans will not want to miss out a couple of ales, as this is the centre for the Theakstone’s Brewery, or you can visit the Tullie House Museum for a fine collection of Roman remains.

Your last walking day takes you out of Carlisle following the southern side of the River Eden. The trail follows parallel with the line of the Wall and Vallum, through Grinsdale and Beaumont, where you finally veer away from the river. You will have views to the peaks of Skiddaw and High Pike to the south and across the Solway Firth to the West. Near Dykesfield House, the trail joins an old railway embankment for a couple of miles before re-joining the line of “The Wall” near Glasson. From here you follow the quiet road to Bowness-on-Solway, site of the Roman fort of Maia and journey’s end.

Return by bus or taxi to Carlisle to celebrate completing the Hadrian’s Wall Path.

Your trip comes to an end after breakfast this morning. Carlisle has excellent transport links to cities throughout the UK.

Getting to Whitley Bay / Tynemouth 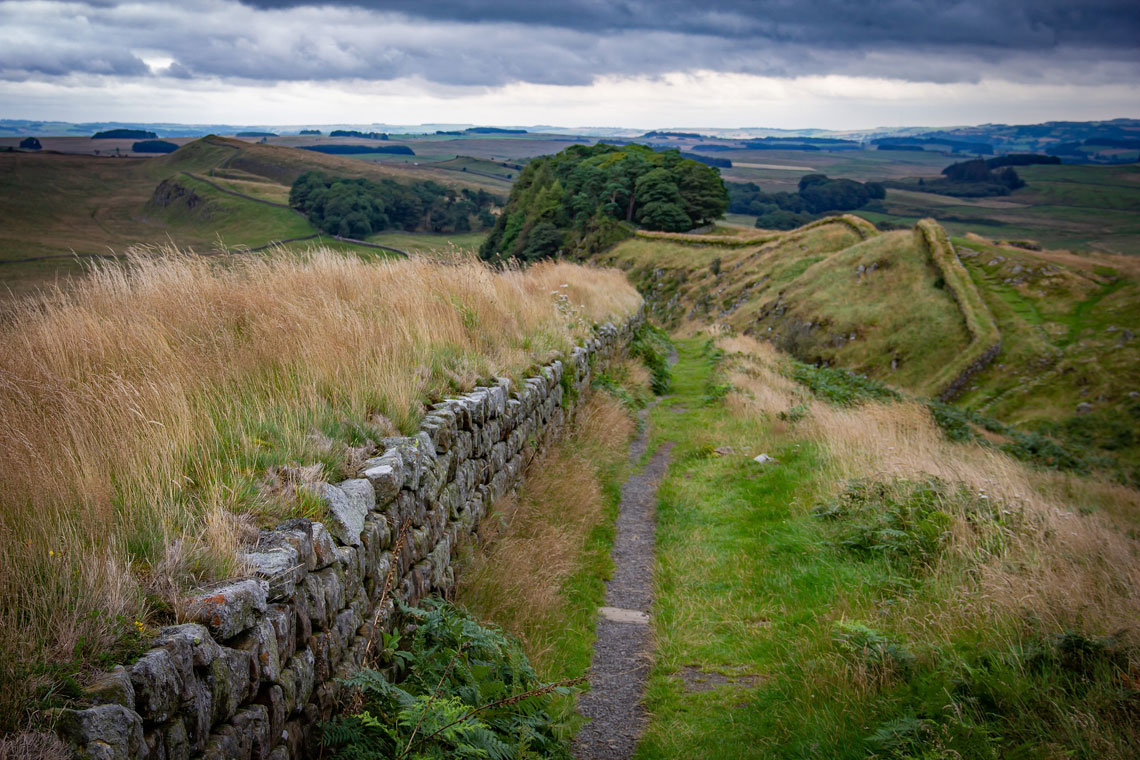