Walk the Great Glen through the Heart of Scotland

Enjoy stunning views of Ben Nevis and breathe in the fresh mountain air of the Highlands.

Visit the 13th century Urquhart Castle on the shore of Loch Ness.

If you’re lucky, you may even catch a glimpse of “Nessie”, the mythical Loch Ness Monster!

Reward yourself with a ‘wee dram’ of whisky in Inverness, the ‘Capital of the Highlands’

The Great Glen Way was opened in April 2002 and quickly established itself as one of Scotland’s finest hiking trails. This long-distance walking trail follows the Great Glen right through the very heart of Scotland from Fort William to Inverness. Along the way, you’ll discover the highlights of the Highlands that make this area such a magnet for walkers. Pass by the foot of Ben Nevis (1344m), the highest mountain in the UK. Follow undulating forest tracks along the shores of Loch Lochy and Loch Ness and walk through a mixture of farmland, exposed high moorlands and woodland as you make your way to the capital of the Highlands, Inverness. The Great Glen Way passes numerous forts and castles that have born witness to Scotland’s turbulent past, from the Iron Age to the Jacobite Rebellion led by Bonnie Prince Charlie, who was finally defeated at the Battle of Culloden in 1746.

The walking is largely on lower ground, following towpaths along the Caledonian Canal and woodland tracks above the lakes. The majority of the route is rated as easy to moderate, with daily walking distances of approximately 13 km to 21 km. The route starts off fairly flat but becomes harder over the last 3 days with short steep hills and longer hills on the last day of walking. The last walking day is long but can be shortened by taking an optional taxi transfer (included in the price) to a point about a third of the way along the trail, skipping the steep climb.

Make your own way to Fort William, which is easily reachable by train from Glasgow or Edinburgh.

Fort William is known as the ‘Outdoor Capital of the UK’ and is set dramatically on the shore of Loch Linnhe under the mighty Ben Nevis. There are only traces left of the original fort, which was built to keep the dreaded Highlanders at bay. Today you will find a proliferation of outdoor shops, cafes, bookshops and bars to entertain you.

If you are an experienced hill walker, you could plan an extra night here to climb Ben Nevis. Alternatively, you could take a boat trip to “Seal Island” to see the grey seals.

Overnight: We use a selection of bed & breakfast/guesthouses in Fort William, all offering en-suite facilities.

Today’s walk is very easy, which will give you the opportunity to do several side trips. The first one being Old Inverlochy Castle, which is one of Scotland’s earliest stone castles (built in 1260). Continuing along the shore of Loch Linnhe, you reach Corpach sea loch, with its lock-keepers’ cottages and pepper-pot lighthouse. You then follow the towpath of the Caledonian Canal, passing “Neptune’s staircase” (a series of 8 canal locks) on your way to the small village of Gairlochy.

You will be staying at Spean Bridge (a further 5.5 km) as there is no accommodation on the route. Normally the guesthouse will be happy to collect you from Gairlochy for a fee by prior arrangement, if you prefer not to walk this last part.

Overnight: B&B or guest house in the highland village of Spean Bridge.

Today’s route is generally easy, with some short steep ascents. You will be walking on a mixture of tarmac, forest paths and tracks, mostly shared with the Great Glen Cycle Route. About 3 km after the start of your walk, you could take a side trip to the Cia-aig waterfall (and the Clan Cameron Museum which, however, is only open in the afternoons) before rejoining the Way at Clunes (prolongs the route with an extra 3 km or so).

From Clunes all the way to Kilfinnan, you walk on forest tracks with splendid views of Loch Lochy and the mountains behind.

Overnight: South Laggan. You will stay at a 3-star guesthouse surrounded by breathtaking scenery.

Another easy walking route today, following disused railway tracks, an old military road, then a canal towpath. Following the eastern shore of Loch Oich, you will walk through the pristine Leiterfearn nature reserve, enjoying the wonderful woodland of ash, birch, elm and hazel. After the lake, you follow a lovely canal-side path to the historic village of Fort Augustus. If you have time you could walk up Meall a’Cholumain, which is a great viewpoint over Fort Augustus.

Fort Augustus was largely built between 1729-1742 as the hub of General Wade’s military road building programme to calm the highlanders after the Battle of Culloden. There are 5 locks at the centre of town on the Caledonian Canal, as well as several museums and some great restaurants. If you arrive early you may even have enough time for a short cruise on Loch Ness.

Overnight: Fort Augustus. Your guesthouse will be one of the many Victorian establishments in the town.

A shorter but harder walk today with steeper ascents, as you make your way along the western shore of Loch Ness. You begin by climbing through a forest of birch and pine, before following a forest track above the lake. You will enjoy great views over Loch Ness through the trees. Your destination today is the pretty village of Invermoriston, with its little bridge built by Thomas Telford. The Invermoriston Hotel is a great place to eat and has several types of malt whisky. They also have great beer from The Skye Brewery. There are nice leafy walks down by the river.

Overnight: Invermoriston. The guesthouse was purpose built in 1995 to provide a family home and bed & breakfast accommodation. Each bedroom is well-furnished and has a spacious en suite. You can relax in the evening by the open fire in the lounge, while the breakfast room enjoys great views of Sron Na Muic.

A moderate day of walking with some steep sections along the side of the glen above Loch Ness. There is quite a bit of undulation today, but hopefully you’ll be used to the walking now! Strong walkers may wish to ascend Meall Fuar-Mhonaidh, from where you will get views from Ben Nevis all the way to Inverness (weather permitting).

You end up at Drumnadrochit, an attractive ‘Green Village’, which has a Loch Ness Monster visitor’s centre…or two! Ruined Urquhart Castle overlooks the lake just east of the village centre and should definitely not be missed.

The walking distance from Drumnadrochit to Inverness is 30 km, which may be too much, especially if you want to see something of Inverness. Therefore, the route is shortened by an optional morning taxi transfer to Loch Laide, famous for its very clean water. From there it is a 21 km walk in total.

Descending then from Blackfold, the Great Glen once again meets the Caledonian Canal before following the River Ness into the centre of Inverness. This is a beautiful and vibrant city, known as the ‘Capital of the Highlands’. You will find many excellent restaurants and lively pubs where you can reward yourself for your efforts with a ‘wee dram’.

Overnight: We use a number of different guesthouses in the city of Inverness.

Your trip and our services come to an end after breakfast this morning. You can either take a flight from Inverness Airport or a train to Glasgow or Edinburgh for onward travel.

Getting to Fort William 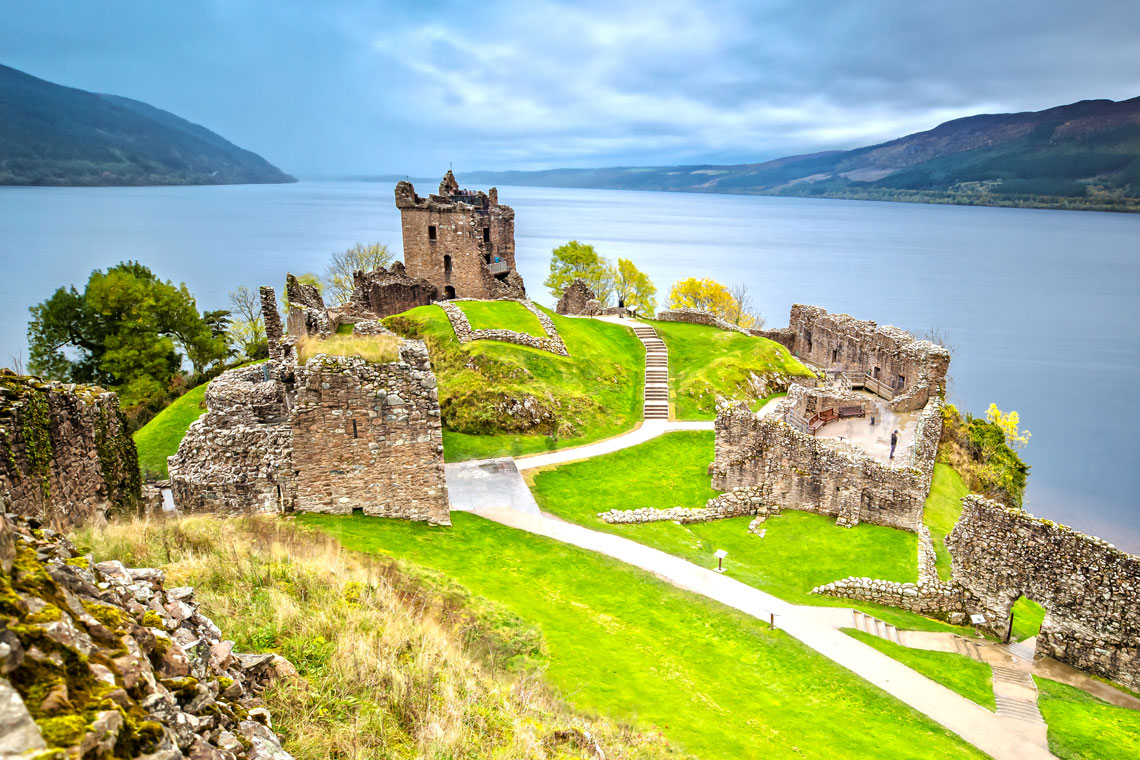