Discover the Iron Age Hill Fort of Maiden Castle and the Roman heritage of Dorchester.

Hunt for prehistoric fossils on this ancient coastline.

This is a stunning walk along the clifftops and rolling hills of Dorset’s Jurassic Coast. From Lyme Regis to West Lulworth, parts of this walk are as beautiful as it gets in the British Isles. It is a walk of great variety, naturally concentrating on the popular Dorset Coast Path; one of the most beautiful stretches of the longer South West Coast Path. The Dorset coastline is an area of outstanding geological importance as over 200 million years of rocks have been laid down, bent and twisted before being eroded by the sea to expose rock profiles on the beaches which are accessible to fossil hunters and scientists alike. So important is this area that it is has been designated a UNESCO World Heritage Site.

Away from the coast, this walk also dips briefly inland to visit a mysterious region of ancient hill forts, Roman and Saxon remains – the ancient kingdom of Wessex. You will spend a night in Dorchester (Thomas Hardy’s Casterbridge), with its fascinating museums and Roman heritage.

The tour starts from another town with literary associations: the historic seaside town of Lyme Regis. Its medieval Cobb (harbour wall) is a favourite place for almost everyone who visits it. John Fowle’s novel The French Lieutenant’s Woman is set there, and the author lived in the town until his death in 2005. Your firs walk takes you westwards through the verdant, jungle-like Undercliff Nature Reserve. Then walking east from Lyme Regis, you will visit Abbotsbury – a gem among English villages – while Maiden Castle is a spectacular archaeological site of great importance. Returning to the coast, the last part of the walk is a real rollercoaster ride along the cliffs, above the natural arch formation of Durdle Door and then down to the perfect oval bay at Lulworth Cove.

Although the natural surroundings are spectacular, the Dorset Coast is no wilderness area. You will be close to attractive villages and towns throughout the journey. The coastal villages can be rather crowded in high summer, and are understandably popular, but you will also find many quiet areas whilst walking. The weather is generally warmer and more settled on England’s south coast than in other parts of Britain and, some steep paths aside, the grade is on the easier side of our walking holidays in the UK.

Day 1: Arrival in Lyme Regis on the Dorset Coast

Make your way to Lyme Regis. Explore the town and in particular the medieval stone (Cobb) harbour. The Lyme Regis Museum offers a great introduction and insight into the natural history of the area.

Overnight: Lyme Regis. You will spend two nights in a 4-star guesthouse in this seaside town.

Your first walking day takes you west through the Undercliff Nature Reserve to Axemouth and Seaton in Devon. The Undercliff is a sheltered wooded wilderness along the Jurassic Coast. It is the closest thing to a rainforest that exists in the UK, with a warm and humid microclimate nurturing a carpet of ferns, fungi, wild clematis and orchids beneath a dense leafy canopy of Ash and Field Maple. It’s also home to a variety of birds and wildlife including ravens, peregrine falcons and owls, as well as reptiles and amphibians such as grass snake, common lizard and great crested newt.

You can return to Lyme Regis by bus or walk back along the coast, exploring the cliffs for fossils.

Today you will enjoy a beautiful roller coaster walk along the Dorset Coast. Following lovely clifftop trails, you will pass Golden Cap – the highest point on the South Coast at 191 m – as well as an interesting pub at Seatown, which was heavily involved in smuggling in centuries gone by.

Overnight: West Bay, the harbour of the old market town of Bridport.

This is a charming walk which takes you off the cliffs and along the first part of the pebbly long shore drift which eventually becomes Chesil Beach, the longest shingle beach in Europe. At West Bexington, you climb steeply inland to the prehistoric fort of Abbotsbury Castle. You then descend to Abbotsbury, one of the most traditional villages in the UK. We recommend a stroll up to St. Catherine’s chapel at sunset or dawn. This chapel served as a lighthouse from monastic times and through the destruction of the monasteries as a reference landmark for shipping.

Overnight: Abbotsbury. We use a number of lovely accommodations in the village.

Today’s route takes you inland via the Dorset Ridgeway Path to Maiden Castle and Dorchester. Maiden Castle is a large ancient earthwork fortress, which was sacked by the Romans in the 1st century A.D. It is the greatest Iron Age hill fort in the UK and takes almost an hour to walk around. Find the remains of the Roman temple and admire the formidable ramparts.

The Romans established Dorchester on the plain below the fort, and the existing town still exhibits a plan set within the lines of the Roman design that was not broken until the coming of the railways in the 1840s. Dorchester is even home to the finest example of a Roman town house in Britain.

This bustling market town is also famous as Thomas Hardy’s fictional “Casterbridge” and the Dorset County Museum has an exhibition dedicated to the author.

Overnight: Dorchester. Your accommodation is an early 19th century townhouse that has been converted into a 4-star guest house, offering spacious rooms and great comfort right in the heart of the town.

While your baggage goes direct from Dorchester to West Lulworth, you return by bus or by train to the coast at the lively resort of Weymouth. You then follow the Dorset Coast Path eastwards along the brilliant white chalk cliffs from Weymouth to Lulworth Cove. On the way you pass the natural arches of Bats Head, Durdle Door and the long abandoned medieval village of Ringstead. This is another roller coaster day, but you can bypass the hilliest sections with a more inland route.

Lulworth Cove is a beautiful spot, albeit a busy tourist honeypot. However, most visitors do not stay the night and you could get up before breakfast to have the cove all to yourself or return to Durdle Door in the evening for beautiful sunsets!

*Please note: West Lulworth has a 2 night stay minimum at weekends. If you start your trip on a Sunday or Monday, then you would be in West Lulworth over the weekend. In this case, you can either:

Your trip comes to an end after breakfast this morning. You can return by bus (or taxi) to Weymouth and then take a train to London for onward travel.

Getting to Lyme Regis

Getting from West Lulworth 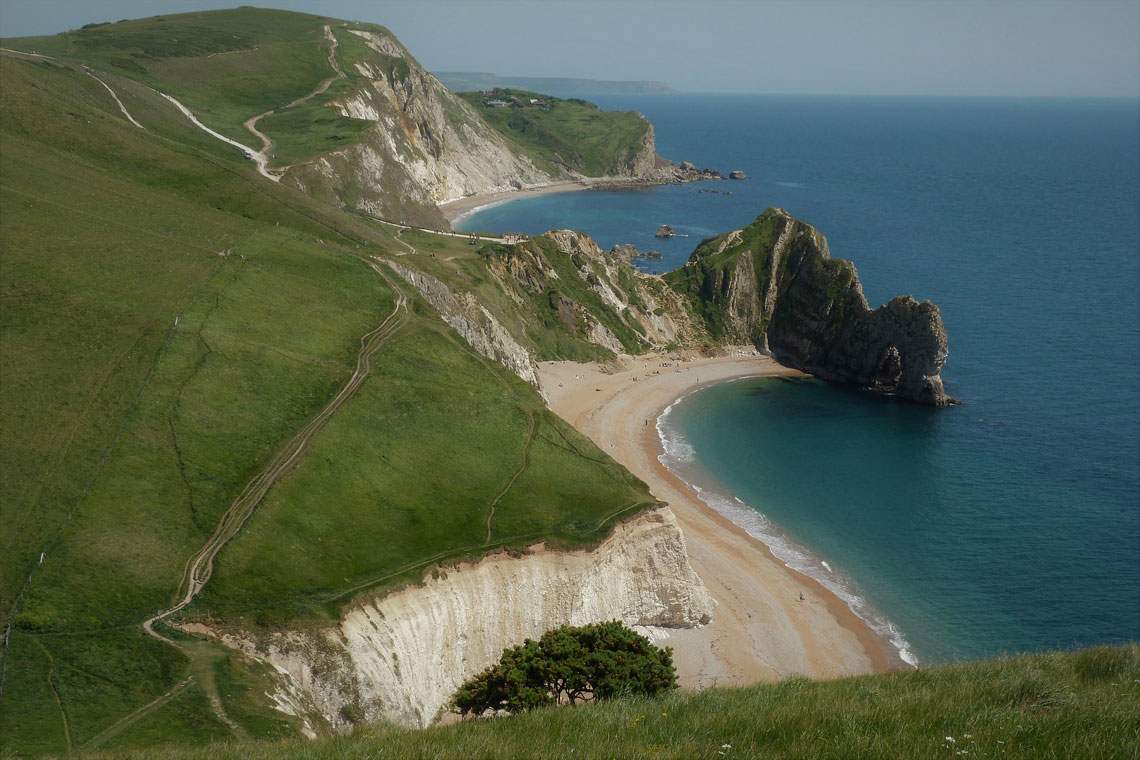