Cycling through the history of two countries from Dubrovnik to Mostar

Cycle along the old railway line and sleep in beautifully converted railway stations.

Enjoy the unspoilt rural surroundings of the Konavle and Popovo polje valleys.

Visit the 600-year old Blagaj Tekke monastery at the source of the Buna river.

Walk across the famous 16th Century Stari Most Bridge in Mostar.

Explore Dubrovnik’s Old Town and enjoy a swim in the warm Adriatic waters.

Cycling the Ćiro Bike Trail from Dubrovnik to Mostar

This is a 7-day self-guided cycling holiday which starts in Dubrovnik, then follows the Ćiro trail all the way to Mostar, Bosnia and Herzegovina, before returning to the beautiful walled city of Dubrovnik on the Croatian Adriatic coast.

What is the Ćiro trail?

The Ćiro trail is a new bike route that runs from Dubrovnik in Croatia to Mostar in Bosnia and Herzegovina. This paved cycling route follows an original steam locomotive railway line which was built in 1903 during the Austro-Hungarian Empire and once ran all the way to Vienna. The section between Mostar and Dubrovnik was in operation until 1976, when the Yugoslav authorities closed all lines that were not profitable and terminated railway connections to Dubrovnik. In November 2017 it was re-opened as a unique cycling trail named Ćiro (named after a popular steam locomotive). Passing numerous abandoned towns and monasteries, and going through viaducts and old railway tunnels, the Ćiro trail has been referred to as an “open air museum”. Some sections of the trail are of it are still in active use by trains (between the towns of Čapljina and Mostar), so the path uses roads alongside the railway and the Neretva river there.

On this cycling holiday you’ll start in Dubrovnik and follow the Ćiro trail through the Konavle valley and across the border to Mostar. You will discover valleys, rivers, and lakes, and ancient stone bridges and abandoned towns as you cycle through forgotten picturesque landscapes that were abandoned during the Bosnian War of the 1990s. Highlights include the old bridge in Mostar, the Roman ruins of Mogorjelo, the Orthodox Church in Zitomislici and the Nature Park Hutovo Blato. In addition, some of the hotels along the route are beautifully converted old railway stations.

This is the Ideal holiday for cycling-enthusiasts hunting for a hidden gem of a route. When you finish your bike ride in Mostar, it is also possible to continue cycling north for a few more days to Sarajevo (the capital of Bosnia and Herzegovina). Please enquire for info.

You will be met by our local representative at Dubrovnik airport and transferred to the Konavle countryside for your first night. You will have your bicycle fitted and tuned, before enjoying a warm-up bike ride through the orchards and vineyards of the Konavle valley.

This quiet corner south of Dubrovnik is renowned for its lush Mediterranean vegetation, charming villages and dramatic coastal cliffs. The mountains provide an impressive backdrop to this fertile agricultural region. You will find cypress and pine trees in abundance, with vineyards almost everywhere you turn.  The Konavle valley is best known for malvazija, an endemic grape producing a very pleasant white wine.

Day 2: Cycling through the Konavle countryside

Today’s cycle route follows the old railroad trail through the hills and rural villages overlooking the Konavle valley. You will have plenty of time to explore the hilly countryside before returning down into the valley and the village of Gruda.

Day 3: Cycling the Ćiro bike route from Konavle to Bosnia-Herzegovina

Today begins with a short transfer from Konavle to Dubac, a small town close to the border with Bosnia-Herzegovina. From here you will cycle across the border into Bosina, following the Ćiro railroad trail through the mountains towards the fertile countryside of the Popovo Polje karst valley.

The Christian Orthodox Monastery of Zavala is well worth a visit, dramatically built into the cliffs and with impressive frescoes. The Vjetrenica Cave is another highlight of this area.

Day 4: Cycle from Ravno to Čapljina

Today you will cycle through the swamps and marshlands of the Hutovo Blato Nature Park. This stretch of the Ćiro trail includes many beautiful old railway bridges, viaducts and tunnels. We recommend a stop in Hutovo, a small medieval fortified town. You will cross the Neretva River and cycle over the old railroad bridge which was designed by the famous Gustave Eiffel (who designed the Eiffel Tower in Paris). Today’s route finishes in the pleasant town of Čapljina.

Day 5: Cycle from Čapljina to Mostar

Today’s bike route follows the course of the Neretva River. At one point, you will cross it and cycle to the old oriental town of Blagaj, located at spring of the Buna River. Here you will find an impressive monastery built into a rocky cliff above the spring.

Afterwards, you will continue on the final leg of your cycling trip to the captivating and historic city of Mostar. The most famous site in Mostar is the beautiful Ottoman-style bridge, which spans the Neretva river in the historic centre of the city. The bridge was actually destroyed by air strikes during the 1990’s war that followed the breakup of Yugoslavia but has since been faithfully reconstructed and restored to its former glory. The bridge is 21 m high and you will frequently see members of the Mostar Diving Club dive off the bridge. The best views of the town are from the minaret of the Koski Mehmed Pasha Mosque.

After breakfast you will be transferred from Mostar back to Croatia and to the medieval walled city of Dubrovnik. The transfer by car takes about 3h. Upon arrival in Dubrovnik, you can either explore the town by yourself or take an optional guided historical walking tour (extra cost). The old town is completely pedestrianised, and you could happily spend a day just wandering around its narrow, cobbled lanes. For the best views, walk a circuit of the 13th-century city walls or take the cable car up to Mt. Srd for a bird’s eye view of the city and its offshore islands, scattered across the shimmering Adriatic. Many locations around the city will be familiar to fans of the TV series Game of Thrones.

A transfer is included to take you to Dubrovnik Airport for your return flight. 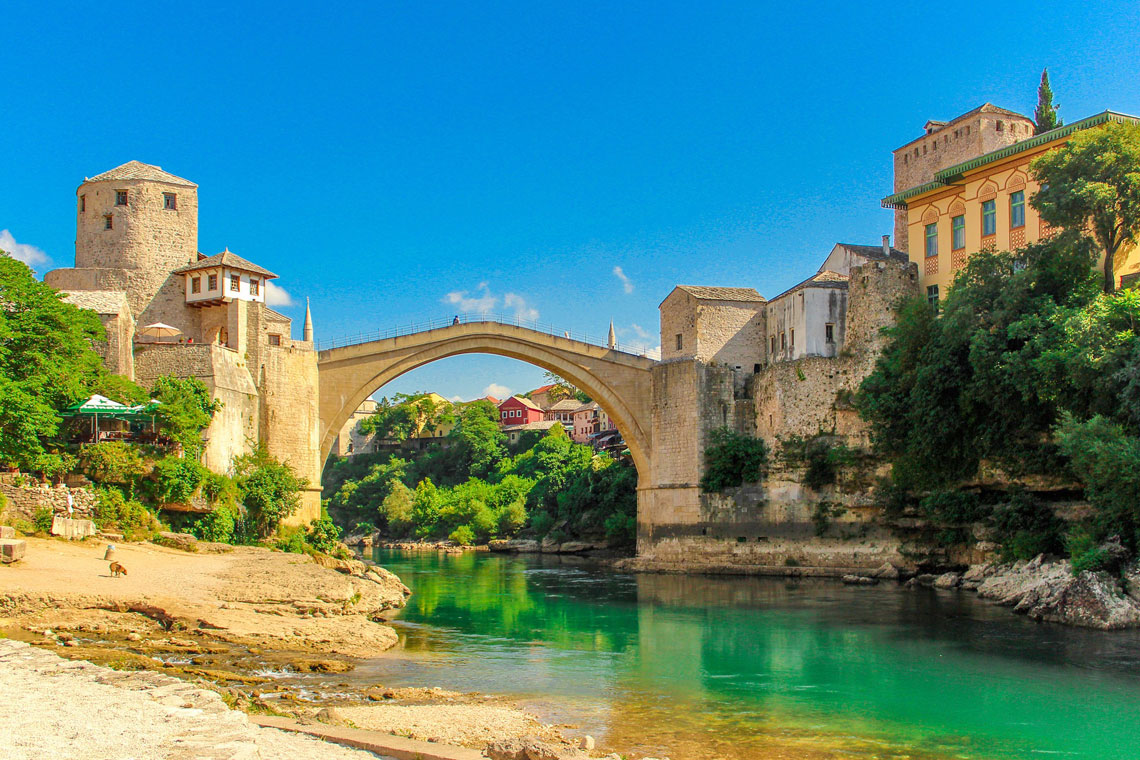