Cycling through some of the prettiest scenery in southwest France

The dramatic medieval walled city of Carcassonne, perched high on a rocky hilltop

The beautiful town of Béziers, with its 2,000-year-old Roman bridge and cathedral

Cycle from the ‘pink city’ of Toulouse to the glistening Mediterranean Sea along Europe’s most beautiful canal; the stunning Canal du Midi. The stresses of everyday life will seem a million miles away as you cycle along the tranquil waterway, lined with centuries-old trees.

There is much to see along the way, from antique barges and beautiful stone bridges to medieval villages and Romanesque cathedrals. Among the highlights are the spectacular medieval walled city of Carcassonne

The landscape gradually changes from rolling hills to vineyards, until you finally reach the marshes, sand dunes and lagoons of the Mediterranean coast. Your trip comes to an end by the azure blue sea, in the charming fishing port of Sète.

Day 2: Cycle from Toulouse to Castelnaudary

Leave Toulouse via the Paul Riquet bridge and follow the cycle path along the tree-lined Canal du Midi. You will pass numerous characteristic barges before entering the rolling countryside of the Lauragais. Take a break in Avignonet, scene of numerous battles during the Albegenic crusades.  Here you will find lots of medieval remains and statues of crusaders, as well as the magnificent gothic church of Notre-Dame des Miracles.

At the foot of the Montagne Noir, you reach the highest point of the canal. This is the Narouze watershed, between the Atlantic and the Mediterranean. From here, you descend to to Castelnaudary, where you will spend the night. Why not take the opportunity to try a real authentic cassoulet!

Day 3: Cycle from Castelnaudary to Carcassonne

Surrounded by the Montagne Noir in the east and the Pyrenees in the south-west, you cycle along an original, thousand- year-old tow path to the river harbour of Bram. The surrounding landscape changes from cornfields to vineyards. You pass centuries-old villages and waterworks like Béteil and the Lalande lock. You will pass the Cugarel mill, the Villepinte dam and the Rebenty aqueduct, before the fairytale medieval castle of Carcassone finally comes into view, dramatically perched on a rocky hilltop. Staying here for the night allows you to explore the medieval citadel in peace, after the tourist day-trippers have left.

Day 4: Cycle from Carcassonne to Homps

Leaving fabulous Carcassonne behind, you return to the peaceful tranquillity of the canal, surrounded by imposing plane trees. Admire the bridge at Orbiel and the 12th century church in the port of Trèbes. It is worth making a stop in the Gallic village near Marseillette and taking a walk to Capendu to visit its Roman chapel. Continue through undulating vineyards to the charming village of Homps.

Day 5: Cycle from Homps to Béziers

After the lock of Argens, you follow the winding path along the hillside to Le Somail. Take a break here in the old library. After that you cycle along the Canal de la Robine to Capestang with its magnificent collegiate church, already visible from afar. From its bell tower you can enjoy a breathtaking view of the surrounding countryside.

Getting back on your bike, you continue past the Gallo-Roman remains of the village of Poilhes la Romaine and the Oppidum d’Ensérune. You can also admire the Malpas tunnel and the 9 locks of Foncérannes. They are evidence of the brilliance of the architect Paul Riquet, the man responsible for the construction of the Canal du Midi. Monsieur Riquet’s native town – the historic Béziers – is your destination today.

Day 6: Cycle from Béziers to Sète

Leaving Béziers, the sea is not yet visible – but you can smell it! The landscape now becomes flatter, forming a mosaic of dunes, swamps and lagoons. This coastal region is home to many egrets, who strut proudly among the horses and cattle. As you reach the old town of Agde, with its 12th century black cathedral, you cross the Hérault river in the direction of the Thau lagoon.

The Canal du Midi reaches its endpoint at the lighthouse in Onglous. The last part of your cycling route then follows the beach from Marseillan to the fishing port of Sète. This authentic town, full of pastel coloured houses with wrought iron balconies, is crossed by several connecting canals and the Thau Basin. In the harbour you find an abundance of fish restaurants, where everything is as fresh as can be!

Your Canal du Midi cycling holiday comes to an end after breakfast this morning in the pleasant town of Sète. The largest fishing port in France, Sète is also known for its beautiful beaches. Perhaps you will have time for a refreshing morning swim before beginning your homeward journey! 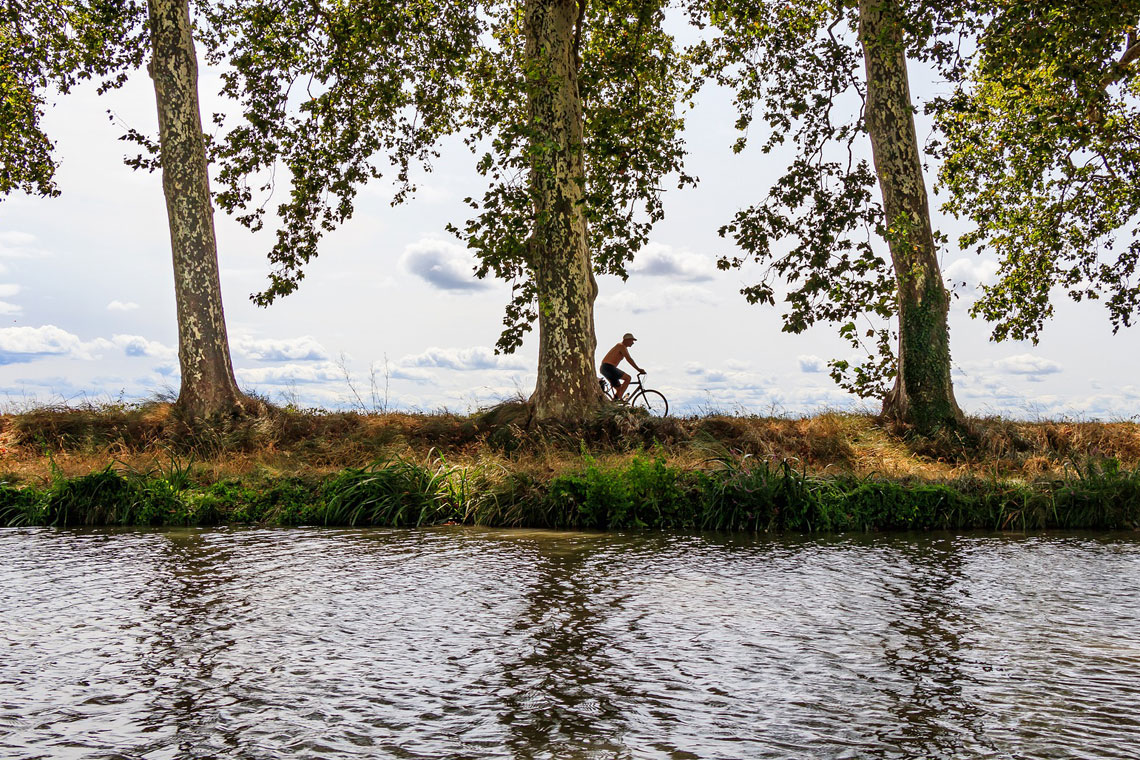