The pristine Playa del Mónsul, considered by many to be the best beach in Spain

The ruggedly beautiful Cabo de Gata Natural Park is the perfect destination for off-season hiking. This wild south-eastern corner of Spain has a dry desert climate and a landscape to match. With its prickly pear cactuses, agave plants and palm trees, it is reminiscent of Mexico or Arizona. In fact, it will come as no surprise that Cabo de Gata and the neighbouring Tabernas desert have been popular locations for some of the great Western movies, including A Fistful of Dollars and The Good, the Bad and the Ugly.

The park is designated a UNESCO Biosphere reserve and has been protected from development, so avoiding the mass tourism of much of Spain’s Mediterranean coast. Cabo de Gata has therefore been preserved as one of the last completely unspoilt stretches of Mediterranean coastline. Many parts are only accessible by foot, and the numerous walking trails make this an incredibly rewarding hiking destination.

This week-long walking holiday begins in the former fishing village of Agua Amarga then takes you inland to Rodalquilar, before ending at the lively beach town of San José. The walking routes follow fishermen’s trails, converted railway lines and narrow goat tracks. You will pass by tiny whitewashed villages, abandoned windmills and goldmines as well as volcanic rock formations and secluded coves on your hike along this idyllic Andalucían coastline.

Your Cabo de Gata hiking trip begins in the pretty fishing village of Agua Amarga. Undiscovered by mass tourism, this laid-back beach town is one of Andalucía’s hidden treasures. Your accommodation is right by the beach, in a white-washed hotel built in the typical style of Southern Spain with terraced gardens and views to the bay.

On your first day you have the option of two different hikes.

The first hike involves a steep ascent up to Mesa de Roldán, where you follow a path along an abandoned railway line with sweeping views to the sea.

The section option begins with an inland stroll to an ancient olive tree. Then you hike toward the coast to explore the typical steppe-like habitat of “los espartales”.

From Agua Amarga you hike south, first on inland paths then along the coast to reach the village of Rodalquilar, set in a valley of the same name. You’ll pass the characteristic dry riverbeds called “ramblas” and follow them down to hidden coves, where lush greenery creates surprising oases in the desert. Your route takes in the lovely bay (and quirky hippy colony) at Las Negras and the stunning beach at El Playazo.

Rodalquilar is a former gold mining town and the eerie and fascinating abandoned gold mines are still there, set in Martian-like red rock terrain. Nowadays the town has the feel of a desert oasis; its large botanic garden contrasting with the barren surroundings. You will stay in a very comfortable Spa hotel with Arabic and Andalucían influences.

The Rambla de la Granadilla winds through barren hills, a fertile path with a different type of vegetation. Here you will find palms and oleanders, reeds, fig trees and poplar groves, with views to the Sierra in the distance. You will pass the infamous abandoned farmstead Cortijo del Fraile, site of the tragic events which inspired Federico García Lorca’s great tale of love and revenge; “Bodas de Sangre” (Blood Wedding). Film buffs may recognise the farmstead, as it featured in the Spaghetti Westerns For a Few Dollars More and The Good the Bad and the Ugly, both starring Clint Eastwood.

You will also have the option of stopping to visit the Casa de los Volcanes (House of the Volcanoes, displays about the local mines and geology) and the excellent botanical garden.

Today’s route traverses areas of eroded lava rock studded with dwarf palm trees to reach imposing extinct volcanoes. Along the way you will pass ancient Moorish water systems, wild olive groves and deep gorges, leaving the desert behind and gazing toward the Mediterranean beyond. In the afternoon, the route circles back to the hotel in Rodalquilar.

This walk follows the cliffs through an unspoilt area, where oases and palm groves emerge from among the dunes and bright white villages provide contrast to complete the picture. Dark sandy beaches and historic pirate hideaways lead to the next accommodation, in a charmingly authentic fishing village. Just inland is el Cerro de los Frailes, the highest summit in Cabo de Gata at 493m.

Today you will discover pristine beaches backed by wild vegetation and dramatic volcanic rock formations, as well as secret coves which are only accessible via hiking trails. Playa del Mónsul is widely regarded as one of the best beaches in all of Spain, with crystal-clear water lapping the soft golden sand, which is surrounded by crumbling volcanic rock formations. The beach featured in the movie Indiana Jones and the Last Crusade.

Other beaches along the route include Los Amarillos, Chica, Grande del Barranco, Lance de Perro, Playa del Barronal, Media Luna and Los Genoveses. This is a beautiful and varied route with ever-changing views and is a marvellous way to end your week of hiking in the Cabo de Gata Natural Park.

Your Cabo de Gata hiking trip comes to an end after breakfast this morning. Taxi transfers can be arranged to Almería, please enquire for prices.

Getting to Agua Amarga 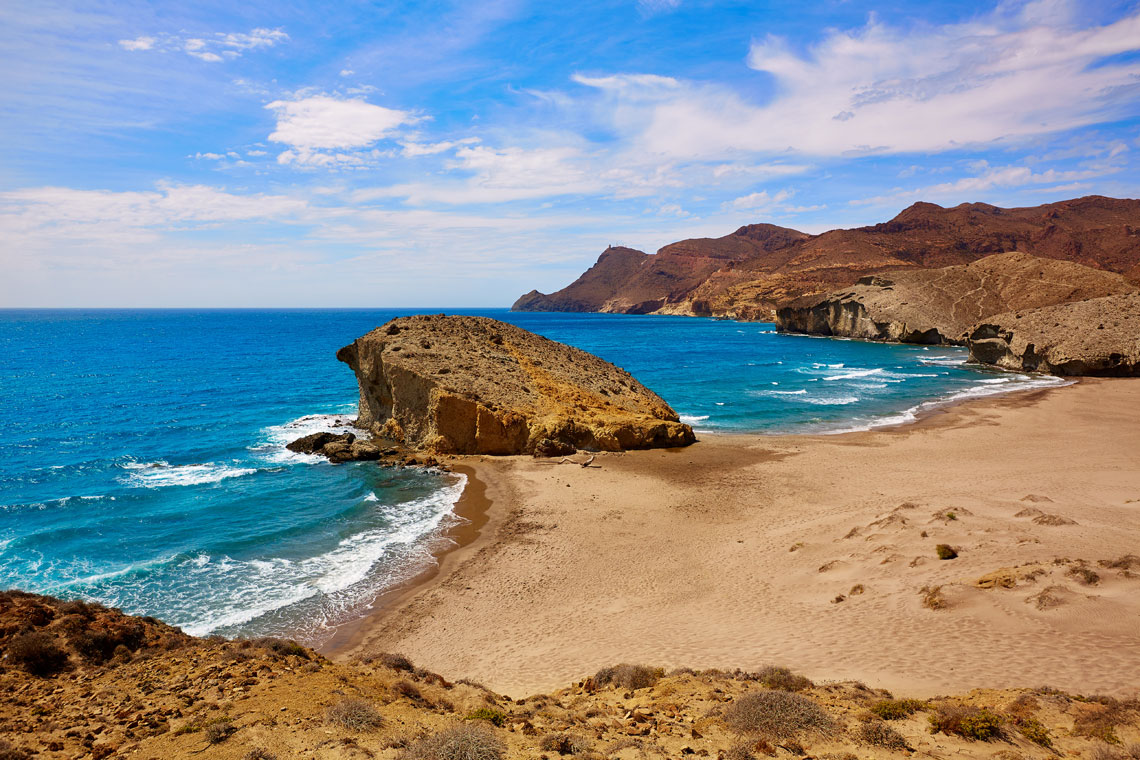