Discover a hiker’s paradise in the Green Heart of Bavaria

Impressive casltes such as the 12th Century Burg Prunn, perched on a vertical outcrop high above the river

In the Green Heart of Bavaria, the Altmühltal Nature Park lies about 100 km north of Munich, Bavaria’s capital. It is the second largest nature park in Germany, with almost 3,000 square kilometres. The gentle pastoral beauty of this region makes it a true hiker’s paradise.

The Altmühltal Panorama Trail follows the meandering Altmühl river from the spa town of Treuchtlingen to the beautiful town of Kelheim, at the confluence of the Danube River and the Main-Danube Canal. This is an incredibly varied walking route, ranging from peaceful forest and riverside trails to scenic paths along open hillsides and high ridges, which often descend to charming villages and historic market towns. Along the way, you will discover medieval castles and fortresses, magnificent churches and monasteries, as well as Celtic and Roman remains. The area is also rich in fossils and is home to the Archaeopteryx fossils (the link in the evolutionary chain that connects birds to reptiles). Steep jagged rocks, sun-kissed juniper heaths, lush green floodplains and extensive forests will line your way. The final stage is a particular standout – from the dramatically situated Burg Castle to the ancient ‘Keltenwall’ and then the jaw-dropping view over the Danube Gorge, with Weltenburg Abbey on a bend of the mighty river far below you. You can visit the Abbey (which houses the world’s oldest monastery brewery) before finishing in style by taking a spectacular boat trip through the Danube Gorge to Kelheim.

The Altmühltal Panorama Trail (Altmühltal-Panoramaweg) is widely regarded as one of Germany’s very best hiking trails and is certified as a quality hiking trail by the German Hiking Association.

This trip can be done as an 9-day or 7-day walking holiday. See the ‘itinerary’ tab for details.

The idyllic little spa town of Treuchtlingen is situated in the centre of the Altmühltal Nature Park, the second biggest nature park in Germany. If you arrive early you can spend the day relaxing in the renowned Altmühl Thermal Spa.

Beginning your hike along the Altmühltal Panorama Trail with a short ascent along a forest path, you will soon enjoy lovely views over the Altmühl River meandering through the valley. You continue past the ‘Devil’s Pulpit’ and the Hollerstein viewing point before descending into the valley and following a leisurely riverside path to the medieval village of Pappenheim, overlooked by its impressive castle.

A longer walk today. You begin with a quite steep ascent from Pappenheim to a path high above the valley. This scenic path leads you first to Solnhofen and the archaeological site where fossils dating back over 140 million years have been discovered. The Solnhofen Museum houses an impressive collection. Shortly afterwards, you reach one of the highlights of the trail; the beautiful limestone rock formations known as the ‘Twelve Apostles’. Continuing over juniper heathland, you will enjoy splendid views of the Gailach Valley on your way to the pleasant market town of Dollnstein.

A lovely varied route today, walking high above the Altmühl River. Leaving Dollnstein, you will shortly pass the impressive Burgstein Cliffs, before continuing through forests and juniper heath. The last section offers wonderful views to the lovely Baroque town of Eichstätt, with the 14th Century Wilibalds Castle towering above it.

From Eichstätt, you ascend to the Jura heights on lovely forest paths. You will enjoy views to the Roman Vetoniana Fort on the opposite side of the valley before passing the Buchenhüller Mammuthöhle, a large cave where the well-preserved skeleton of a mammoth was found in 1911. You will later walk through the idyllic Gugoldinger Wacholderheide nature reserve, which is home to numerous protected and endangered plants and animals. Finally, you pass through the Arnsberger Leite, with its steep, jagged limestone rocks and juniper bushes. You will soon enjoy wonderful panoramic views to Kipfenberg Castle. The Roman & Bavarian Museum in Kipfenberg is well worth a visit.

Today’s route begins on shady forest paths which take you up to the Kohlplatte Hill, with lovely views down to the Anlauter Valley. You descend to the village of Kinding, with its fortified church and welcoming taverns. You then continue along the Panorama Trail, with more views to strange and wonderful limestone rock formations. Finally, you descend to the historic town of Beilngries on the Main-Danube Canal.

If you have booked the 7-day tour your trip comes to an end after breakfast this morning.

The distance from Beilngries to Riedenburg is long but can easily be shortened by taking a bus part of the way (bus fare to be paid locally). In that case you would only walk for about 3½ hours.

From Beilngries you ascend to the Arzberg plateau, an island of rock surrounded by valleys. You cross the canal bridge into the 7-valley town of Dietfurt. Following a quiet stretch along the Main-Danube Canal, you soon reach Eggersberg Castle. The Altmühltal-boardwalk the takes you into the pretty village of Gundlfing. You have a wonderful view from the Teufelsfelsen (Devil’s Rock) at the loop of the canal between Gundlfing and Riedenburg. You will spend your penultimate night in the medieval 3-castle town of Riedenburg.

You begin your final walk by ascending through the gorge on a path lined with gnarly trees and towering rocks. The first highlight of today’s route is the magnificent Prunn Castle, perched spectacularly on a vertical outcrop high above the river. You pass the idyllic riverside village of Essing before ascending once again along the Keltenwall (Celt’s Wall), an ancient fortification which leads you through the forest to the cliffs high above the mighty Danube river itself. From here you have an incredible view down into the Danube Gorge and to the Baroque Weltenburg Abbey. Descend to the banks of the Danube and finish your trip with a boat ride through the gorge to Kelheim. The Altmühltal-Panoramaweg ends in the middle of Kelheim’s old town at Ludwigsplatz.

Your walking holiday on the Altmühltal Panorama Trail comes to an end after breakfast this morning, unless you have booked any additional services with us. 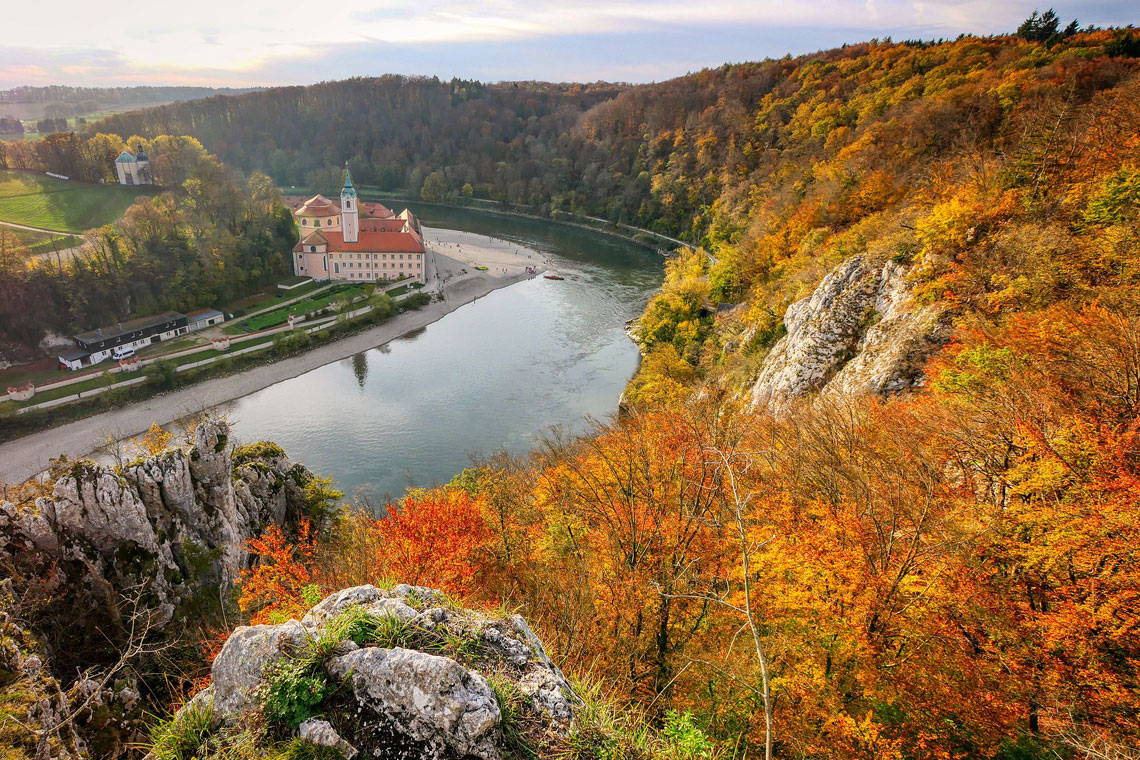